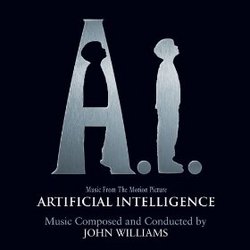 Is it a Kubrick film?  Is it a Spielberg film?  Is it both?  That's the question that many people, myself included, seem to be asking about the recent film A.I.: Artificial Intelligence.  The story focuses on a "mecha" (robot) boy named David (Haley Joel Osment) who is programmed to love his owner/mother Monica (Frances O'Connor).   All is well, and David is learning - until Monica's real son, Martin (Jake Thomas) recovers from his previously incurable illness.  Now the fight for Monica's affection begins, and as expected, David loses to the human child.  That's the Spielberg part of the film.  The Kubrick part of the film is much darker, and follows David through his journey with Gigolo Joe (Jude Law) as they try to find The Blue Fairy - after all, she made Pinocchio real!  The resulting journey seeks to answer some questions raised in the film, and there is a third part that I won't get into - but it seemed just a tad out of the blue. What didn't seem out of the ordinary, though, was John Williams's score to the film.

"The Mecha World" serves a nice overture to the film, with a rather light and upbeat orchestra performing, with occasional light brass fanfares.  An exciting constant rhythm in reminded me of a lighter Total Recall at times, but for the most part was distinctly Williams, especially when the soft harp and piano came to the fore.  Heavy emotional drama saturates "Abandoned in the Woods", with strong themes coming out of the brass and strings, with a rather tense undercurrent.  It's sad and it's moving - perfect music for abandonment!  In fact, it reminds me just a little bit of when E.T. was abandoned in the woods.  This music is reprised later in the "Rouge City", but slowly progresses into the exciting rhythmic material first heard in "The Mecha World".

Soft dissonance in "Replicas", which takes place towards the end of the film, underscores the confusion and fear David experiences as he discovers that he is not unique.  Jumping back towards the beginning of the film, Williams employs a bit of electronics as well as a piano in a playful game of "Hide and Seek". A string-only piece, "Cybertronic" reminded me more of a soft classical number by Khachaturian than a score cue.  Could this be a bit of Kubrick "influence"?

The only real action cue on the album, "The Moon Rising", is from a sequence where David and a bunch of other mechas are being rounded up for the Flesh Fair - a dark and sinister traveling arena where robots are destroyed through various methods.  It starts out as traditional Williams, but then segues (briefly) into a trip-hop mix of sorts before continuing with tense brass that ends on a rather ominous note.  A lengthy cue, running over 10-minutes, "Stored Memories and Monica's Theme" contains a variant on the music in "Hide and Seek", but the second bit, is extremely soft and moving.

"Where Dreams Are Born" is another soft cue, this time with a haunting female soprano vocalizing over it.  The main theme is tender and warm, and will later show up in "For Always", which is performed twice on the album.  The first time is a solo work by Lara Fabian, and the second time it shows up as a duet with Fabian and Josh Groban.  Neither of those two songs actually show up in the film; it was something Williams decided to do at the last minute.

The second act of the film ends (and the third and final act) begins with "The Search for the Blue Fairy".  David is so convinced that the Pinocchio story is true, that he has (literally) traveled to the end of the earth (a submerged New York city) to find her.  The music is once again tender, and when the female soprano shows up once more, the nod to some of Ennio Morricone's works cannot go unmentioned.  However, this is a Williams cue through and through, and the sadness is just dripping throughout.  (The woman next to me began crying during this sequence.)

But if that wasn't enough to get your waterworks flowing, "The Reunion" (which I won't tell you about because it might ruin the film for you) is just as emotional.  Beginning all upbeat and joyous, the piano takes over where the soprano left off.  This is for the most part a piano-based cue, but it is tinged with sadness that cannot be avoided.  At the end, when the "For Always" theme is used, there won't be a dry eye in the house.

I felt that this score was a bit overly sentimental at times.  With nearly wall-to-wall music in the film, there were plenty of cues to pick from when building the album.  I think the inclusion of the song twice is a bit much - once is usually enough, especially when they don't even show up in the film!  (I actually would have liked the rock song heard during the Flesh Fair sequence, just for variety!)  However, Williams has done (once again) a good job scoring a Spielberg film.  Or was it a Kubrick film?  I still haven't figured out which one it is.