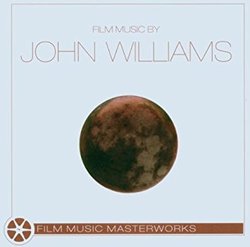 It\'s compilation time again by Silva Screen Records The City of Prague Philharmonic Orchestra seem to be very busy beavers, recently doing this album, an Ennio Morricone one and a James Horner one all at very short notice. This CD puts together a grab bag of past and present John Williams pieces. The exciting half of the album is from the last seven years. All of William\'s 2005 work are represented (Revenge of the Sith, Munich, Memoirs of a Geisha and War of the Worlds) as well as A.I., Harry Potter and The Phantom Menace. The rest of the album is filled out with obvious mainstays (Star Wars, Superman, Jaws, E.T., Raiders of the Lost Ark, etc.).

The album splits in half in terms of excitement: if it\'s a more recent track, it is interesting, if it is an old track, and it\'s old hat and fairly boring. A full album of recent Williams\' work would be much more exciting for me.  At this point, I don\'t know why these orchestras cover the standard titles any more. How many more covers of Star Wars and Jaws can done? By now people probably have the old tracks in some form or another and another version isn\'t going to excite them that much. Maybe it is what sells these albums, I don\'t know. Or maybe the orchestra does it for the opportunity to just play the pieces. That I can understand, but it still doesn\'t excite me.

The City of Prague Philharmonic is a great orchestra in general. They can conjure a rich, full sound, but they aren\'t good at pulling the quicksilver changes in pace that Williams requires. William\'s magic is the tonal shift from the grandiose main verse to a faster B verse (Harry Potter a good recent example) The classic tracks suffer that compilation curse that they sound like they\'re being playing in slow motion. The newer tracks benefit to most from the orchestra\'s talents, as the more recent Williams pieces are slower and introspective. The War of the Worlds and Geisha suites are particularly nice; War of the Worlds even has segments in it that wasn\'t even released in the album.

The math adds up to a so-so release from a great group, and it\'s okay - you don\'t knock it out of the park every time.