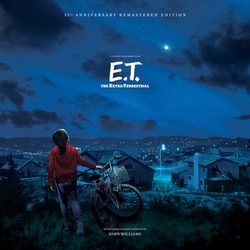 In continued celebration of E.T.'s 35th anniversary, La-La Land Records, Universal Music Group, Universal Studios and Amblin Entertainment proudly present the LP release of the restored, remastered re-issue of legendary composer John Williams' iconic, original motion picture score to the beloved 1982 classic feature film, E.T.: The Extra-Terrestrial, starring Henry Thomas, Drew Barrymore and Dee Wallace, and directed by Steven Spielberg. The incomparable magic of this immortal Academy Award-winning John Williams score – teeming with wonder, brimming with adventure, enlightening with drama, bursting with joy, overflowing with love – is showcased here within this new deluxe LP - a composer-approved presentation that has been specially remastered for vinyl by Bruce Botnick, the original score recordist and soundtrack album co-producer, with a lacquer master cut by the one-and-only Bernie Grundman. Produced by Mike Matessino and Bruce Botnick and this special 2XLP release, pressed on 180 gram black vinyl, is limited to 1500 units and features an attractive booklet insert containing liner notes by Matessino – all of it housed in a stellar gatefold jacket designed by Jim Titus. A must for cinema fans and audiophiles of all ages – this is, without question, an LP release to phone home about!

The short cues that didn't fit onto disc 1 of the CD release have been incorporated into the LP program.