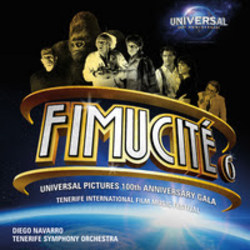 This concert was an epic, and truly historic. We started the show with Brian Tyler's special centennial version of Jerry Goldsmith's famous Universal Pictures Fanfare, in an expanded concert arrangement for orchestra and choir! What an opening! Our Dracula is a special concert version, with revisions made by John Williams himself!

Finishing this CD in the days following the tragic death of James Horner reminded us how important he was to this studio as we featured over twenty minutes of the composer's music in this concert, including Field of Dreams, An American Tail and A Beautiful Mind.

Two hours of music, with extensive liner notes by producer Robert Townson, President of Film Music for Universal Pictures Mike Knobloch and conductor Diego Navarro, with photos from the films and the concert.

This was a night not to be missed, but it took place in the Canary Islands, so many could not make it. Finally you can hear this acclaimed concert from 2012 that combines the magic of Universal Pictures with the magic of Fimucité.