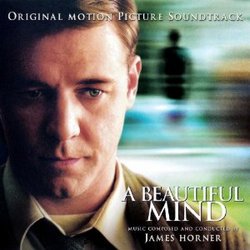 Mathematician John Forbes Nash, Jr. won an Economic Nobel Prize for his pioneering analysis of equilibria in the theory of non-cooperative games.  Aside from being regarded as a genius, Nash was also schizophrenic.  His life is explored in the drama A Beautiful Mind, directed by Ron Howard.  Primarily a drama, with some romantic elements (it doesn't hurt to have Jennifer Connelly in this film), Russell Crowe's portrayal of Nash is downright amazing to watch on screen.

Forget Gladiator—Crowe truly delivers a memorable performance in this film.  Not so memorable, however, is the score provided by long-time Howard collaborator James Horner.

Don't get me wrong—the score works well in the film.  It effectively underscores the drama and romance, and even provides a few bits of tension for the action scene.  Of particular note is the opening title, "A Kaleidoscope of Mathematics."  Here Horner uses a style heard (most recently) in Bicentennial Man, a fast piano, building orchestra, and (in this case) female soloist.  This musical chunk shows up a few times throughout the score ("Creating "Governing Dynamics"") and is used in the film to represent Nash's brain churning away at work.  There are certainly elements of a more dramatic theme in the score, which is first heard in "Looking for the Next Great Idea."  It's a solid theme that shows up more or less throughout the score.  Nash had (or so the film would lead us to believe) the uncanny ability to recognize patterns in common things, which is why he was asked by the U.S. Government to help crack Russian codes.  But was his employment as a code breaker merely part of his schizophrenia?  At one point, he's involved in a deadly car chase.  Here Horner chose not to score action music, but rather a dark repeating motif that builds throughout "The Car Chase."

There is romance in the film as well, as Nash falls in love with Alicia (Jennifer Connelly).  Tender and soft, "Of One Heart, Of One Mind" helps play to the love that Alicia feels for Nash, even though he has a disease.  Of course, the film has a happy ending, with Nash learning to deal with his delusions, and eventually starts teaching again at Princeton, his Alma Mater.  In 1994, Nash won the Nobel for his work, and (in the film) the heartwarming speech is underscored with a sentimental and moving rendition of the main theme in "The Prize of One's Life, The Prize of One's Mind."

While it all works well in the film, there is enough about this score that just seemed to "familiar" to make it stand out.  Some people out there will complain about how a particular track might sound like something else Horner's done, but at this point I just chalk it up to "style."  Not surprising, there's a song to go with Horner's main theme, sung beautifully by Charlotte Church in "All Love Can Be."

In the end, A Beautiful Mind is basically your average James Horner score—effective for the film, but common and—eventually—forgettable for the listener.