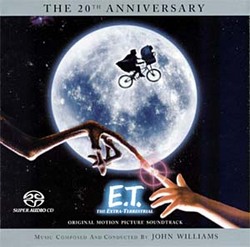 What can one say about E.T.: The Extra-Terrestrial that hasn't already been said in the past twenty years?  Honestly, not too much.  The score is still a landmark piece of work for composer John Williams, who snagged the Academy Award for writing it.  It's still as emotionally moving, tender, exciting and even frightening as it has ever been.  For the 20th anniversary of the film, director Steven Spielberg added a few "new" scenes, and cleaned up a few old ones.  As such, there was a bit of controversy from die-hard purists and fans of the film, but in the end there wasn't too much to complain about (with the exception of the gun removal, which I feel completely diminishes the threat, and therefore removes the motivation for the entire climax).  Also cleaned up was the orchestral score, and this new 20th Anniversary Edition soundtrack release sounds better than ever, and even includes three previously unreleased cues.

The first cue is a new addition: "Main Titles".  For years I had always thought that the main title was merely the sound of wind over some title cards.  Lo, I was wrong!  The atmospheric cue contains atonal drones and reverberating (almost moan-like) notes.  It's very creepy, and sets the tone for the opening scene.  That scene's nearly seven-minute long cue ("Far From Home / E.T. Alone") contains a number of themes to show up throughout the film, most notably the alien theme (dark chords reminiscent of what would show up the next year in Return of the Jedi),  and a more dramatic "government" theme, generally used anytime a government official shows up in the film.  Overall, this is one of the darker cues in the film.  Elliot discovers E.T. in a series of frightening - and then wondrous - cues.  These include two newly released cues, "Meeting E.T." and "E.T.'s New Home".

Many of the lighter cues in the middle of the film involve Elliot and E.T.'s growing relationship, typically with tender harp and strings ("The Beginning Of A Friendship", "Toys", "I'm Keeping Him", and others).  Occasionally a more dramatic element will come into play, quickly followed by some whimsy or comedy ("E.T. and Elliot Get Drunk").  "The Magic of Halloween" is a fun cue, and Williams even gets a rare chance to toss in a cameo of "Yoda's Theme" from The Empire Strikes Back.  Of course the most memorable part of that cue is the "Over the Moon" sequence, which never fails to send chills down my spine.  Things turn dark, though, with "Searching For E.T." - crashing piano strings are used when the mom finds E.T. and Elliot sick in the bathroom - followed by a tremendously emotional moment where Williams uses the alien theme.  I will admit - that is the one part in the film where I nearly cry, and listening to the music brings me close to the edge every single time I hear it.

As the government officials invade the house, enormous pounding percussion signal that the film has turned a corner.  "Losing E.T." is another sad emotional cue, but it's quickly followed by the uplifting "E.T. Is Alive!"  After that cue, we are taken on a wild 15-minute journey through the climax of the film, including the stolen van sequence, the exciting bike chase through the neighborhood, and of course flying to the landing site in the forest.  The end of the film (and the music used) is tremendously emotional and powerful, and will forever remain a classic moment in American cinema.

The "End Credits" features some impressive piano work, followed by a recap of the main flying theme from the film.  All told, this newly remastered album runs almost 76-minutes in length.  Is it worth picking up?  Well, if you don't have the soundtrack in any form, then the answer would be a resounding "yes".  However, if you already have the 1996 expanded issue (the original album was a concert recording and much shorter), then unless you feel the need to get those 3 extra cues, you can pass.