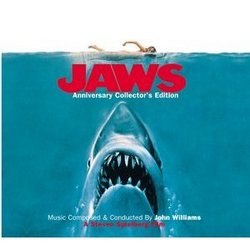 After 25 years of scaring us out of swimming in the ocean, Jaws once again rears its head and has been reissued on video and DVD as special collectors editions. The film looks great, and it even sports a brand new sound mix. Part of that mix included the remastered score by maestro John Williams. While the score was supposed to be released as an isolated score on the original collector's laserdisc version five years ago, it was said that the source tapes couldn't be found in time. Also hoped to be included in that set would have been the complete score, on CD. As they couldn't find the tapes, they just released the original soundtrack album - which for the past 25 years has actually been a re-recording, and not the exact cues heard in the film.

But fans need wait no longer! The tapes have (apparently) been found, and while the DVD doesn't have an isolated score, the CD has been released through Decca Records. While it claims to have "12 tracks containing previously unreleased music", the truth is that all of the tracks have never been released. That minor quip aside, I popped in the CD for the best listen of the month.

Beginning with the ever-familiar "Main Title", the first bit of new material came in the form of the film version of "First Victim" - the terror is certainly still there. While not entirely in chronological order, the bulk of the score seems to be here. The best cue on the album (in my humble opinion, of course) is "Man Against Beast" - it's been one of my favorite scenes in the film for years, and the driving tension presented in the cue is simply enough to drive one giddy.

Other unreleased cues include the death of Alex Kinter ("The Empty Raft"), the attack on the beach ("Into The Estuary"), "The Pier Incident", and many cues from the third act of the film, when The Orca is out at sea hunting the shark. It would have been nice for them to include the cast's rendition of "Lady of Spain", but it's not direly missed.

The quality of the cues is somewhat mixed. This score was recorded 25 years ago on analog equipment, so the amount of distortion is expected. There just doesn't seem to be as much stereo separation and clarity as the original soundtrack album. Additionally, the re-recorded versions of some cues simply flow better - but that's why Williams re-recorded it in the first place. Still, for collectors and Jaws enthusiasts, this is simply a dream come true. Running 50 minutes long, this album deserves a place on your CD rack.