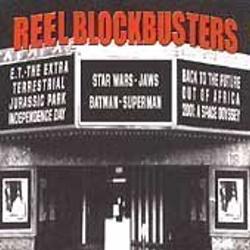 Back in 1986, MCA Records put out an album called "Movie Greats". Now with Hip-O Records (part of the Universal Music Group) releasing "Reel Blockbusters", one could make the argument that this is merely an update of "Movie Greats". After all, many of the same tracks are presented, but that would probably be because these tracks are quite good.

John Williams is showcased on this album – music from Star Wars, Jaws, Jurassic Park, E.T: The Extra-Terrestrial, and Superman are all presented on the album – and all are the original recordings, with the exception of Star Wars. Williams also leads the Boston Pops in a track from 2001: A Space Odyssey ("Also Sprach Zarathustra"). Other themes, including Elfman's Batman, Barry's Out of Africa, Arnold's Independence Day and Silvestri's Back to the Future also get play on the disc.

Whereas the original "Movie Greats" album included just the Main Theme from Back to the Future, here we are treated to the complete 8-minute "suite" which appears on the original soundtrack album. Beyond that little treat, there isn't much going for this album aside from a nice compilation of enjoyable movie themes. If you are a fan of "mix" albums (from film scores) then this album is certainly right up your alley. If you're looking for something more substantial, you probably already have the scores presented on this disc – so it wouldn't make sense to add it to your collection. But all newcomers to film music should consider this a sampler of things to buy