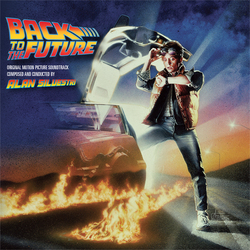 Back to the Future

For the 30th anniversary of Back to the Future and coinciding with the date Marty McFly travels into the future to save his children, Intrada presents this reissue of Alan Silvestri's stunning and spirited score that kicked off an adventure that spanned three films.

Intrada premiered the score in 2009 with a 2-CD set, now out of print, featuring the score as it was heard in the film on disc one and an earlier, unused version of the score as a bonus on disc two. This new single-disc release features just the score as heard in the film, rebuilt from the ground up including new mastering and updated packaging to deliver a crisp, vibrant punch. Intrada worked from transfers of the original two-track elements housed at Universal Studios.

One of the many elements that contributed to Back to the Future's success is Silvestri's adventurous, exciting score. Its impact has been so widely regarded that it has become part of a traveling repertoire of films being shown with live orchestra performing the score in concert halls around the world.

And while the score was an integral part of the film's overall experience, it was relegated to only two tracks—a mere sampling—on the original soundtrack album released in 1985. The MCA Records release focused primarily on the songs from the film, including the Huey Lewis and the News hits "The Power of Love" and "Back in Time." But a few minutes of score was not quite enough, and for years, collectors of film music and fans of the movie pined for a release of the complete score. The 2009 Intrada release reconciled that and this new release keeps this important score in print.