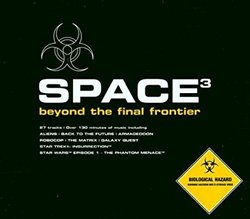 Space 3: Beyond the Final Frontier

by David A. Koran August 18, 2000
3.5 / 5 Stars
With Silva's third entry in their "Space" series of sci-fi based scores, we get a rather impressive selection of music from classic older and newer films, some of which have never been released to date. The pieces on the album are grouped loosely according to the types of thematic material that were in the original films. I say "loosely" due to the fact of Elmer Bernstein's Ghostbusters appears under "Alien Invaders" on the first CD, which if you've seen the film, obviously it is not. Nevertheless, it's an ambitious effort by Paul Bateman and Nic Raine with their usual compadre's at The City Of Prague Philharmonic Orchestra. The listener gets selections from some of the more known like Jerry Goldsmith, Alan Silvestri and John WIlliams, but also some lesser-known contributors like Ron Jones, John Addison and "P.D.Q. Bach" himself, Peter Schickele. Generally, it’s a consistent piece of work that we expect from Silva, and a good entry into the "Space" series.

Fittingly enough, both discs start out with strong and memorable pieces, albeit somewhat altered from their original soundtrack presentation. James Horner’s "Main Title" and "Ripley’s Rescue" from Aliens slowly build the opening of the disc that begins the ebb and flow of the types of pieces heard on the first CD. On the second disc, it starts off with Craig Safan’s rousing "Main Theme" to The Last Starfighter, a noble beginning to any album, let alone the second disc of a collection. Of the selections chosen, the second disc mirrors the first in the type and tone of music used, with slightly less known pieces dominating the track listings. The better cues on the CDs, surprisingly enough, are the ones that haven’t seen a commercial release until now, including John Debney’s Emmy Award winning "Main Theme" to The Cape. Also, on the first CD, we get a taste of Ron Jones’ acclaimed score to the video game, Starfleet Academy, a rarity on genre compilation albums.

Unfortunately, the CDs do cater to the better known movies of the past decade and a half, such as Back To The Future, The Phantom Menance, and The Matrix. They’re fine scores in their own right, but have been on more than their fair share compilation albums in the past few years. What can be heard from the differing scores, in both time and composer, is that over time the strong thematic and melodic qualities of film scores have become somewhat limited in such a rich and diverse subject area as science fiction. Viewing the groupings of the pieces on both of these CDs, the subjects covered by films are also limited in scope and range, which include aliens, superheroes, space and time travel, and the destruction of earth. Granted this is a general summing up, but it’s what most of the science fiction we’ve seen (and heard) on screen is based upon. This may limit some of the creativity of composers now and again, but with the diverse styles represented here, you really couldn’t tell.

For a compilation, Silva’s latest isn’t bad, but I believe this should be the last just based upon eligible films and music. There was a lot of cheesy sci-fi music written during the boom period of the 1950’s that could be represented but hasn’t, maybe this will prove fodder for a reasonable fourth collection of music. Maybe a foray into horror films can help supplement the musical menu as well, since in all intensive purposes, most horror can also be considered science fiction, and in the case of recent films like Supernova and Even Horizon and classics like Alien, those boundaries are crossed and even ignored.