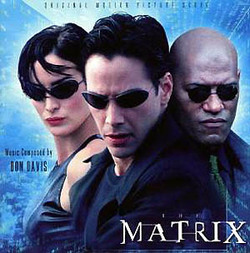 by Josh Wisch June 23, 2001
4.5 / 5 Stars
An eclectic score for an eclectic film. At various times, the film, The Matrix is philosophical, romantic, and extraordinarily violent. Add a good dose of some highly disturbing footage, and you're suddenly deep in the water up to your neck when it comes time to score the film.

The Matrix focuses on a character named, Neo (Keanu Reeves), who is essentially the Jesus Christ of the cyber future. A prophet who does not yet understand that his true purpose is to save the world. In this future, human beings have become heads in a bottle, each one of us actually stuck in gooey tubes with wires protruding from every possibly body part, while in our minds, we think we are free and roaming the planet as normal. A group of cyber beings, known as "Agents", keep us in this virtual prison without our knowledge. It is up to Neo and his merry band, including Morpheus (Laurence Fishburne) and the luscious Trinity (Carrie-Anne Moss), to break free the chains of this enslavement and lead us all to the promised land, the last human city, Zion.

Don Davis has created a score that is composed of a large chunk of incidental music. It is not the type of music you can listen to straight through without adjusting the volume. This type of up down up down approach works well in the film, however, so I will not complain. The parts that do "come out", are powerful. The opening track ("Main Title / Trinity Infinity") begins with a strong, eeriel opening with large orchestral chords. As we get into the second half of that first track, it becomes much more a chase scene, and is reminiscent of something from the Elfman Batman scores. This struck me because when I first experienced the film, I was reminded of those films as well. Until I sat down and listened to the score, it did not occur to me how much of that was due to the music. That influence pops up more than once during the score. To my mind, it's blatant thievery at some points, but once again, I will not complain. This type of "borrowing" can help a score. Classical composers have been doing it for hundreds of years, and Mr. Horner has been doing it to himself for most of his career. But, I digress.

For the discerning listener desperately searching for highly disturbing sections of film music, take track 2 ("Unable to Speak") out for a spin. Anyone who has seen the film will pick up where this track fits into the movie's action. We get a good glimpse at Mr. Davis' range as he goes from large opening to chase scene to disturbing little ditty in just two tracks.

Perhaps the most surprising aspect of this soundtrack is that even though the film is dark, and most of the music is dark, Davis finds time to insert some truly heroic chords here and there. In fact, some of these heroic sections are outright cheesy - and I loved them! First that comes to mind is track 9 ("Ontological Shock"). In this portion of the film, Neo realizes his true power, and appropriately, the soundtrack realizes its full potential. There were only a few parts in the movie where Don Davis could have legitimately inserted any mainstream style film music, but he found the perfect part for it, latched on to it, and hung on for dear life. It was a stroke of brilliance and showed fantastic instinct on his part.

This soundtrack is overall good clean fun. I can't speak for the Marilyn Manson ridden "music from and inspired by" soundtrack, but Davis' work is good. The score is not consistently present enough to warrant listing it as good driving music, but it is the type of soundtrack that (a) fits the film, and (b) has enough really enjoyable areas to make it a good purchase.