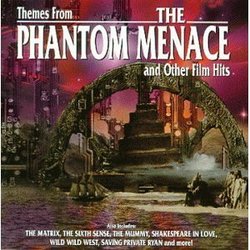 Themes from The Phantom Menace and Other Film Hits

Review: Themes from The Phantom Menace and Other Film Hits

In the past, Varese Sarabande has released near-yearly compilation albums such as "Hollywood '94", "Hollywood '95" and "Hollywood '96". Then they seem to have stopped. The closest thing to it came out this past fall, however, with "Themes from The Phantom Menace and Other Film Hits". One could refer to it as "Hollywood '98-'99" as it includes music from some of the bigger films over the past two years.

This album begins, of course, with five cues from Star Wars: Episode One - The Phantom Menace. With Frederic Talgorn conducting the Royal Scottish National Orchestra and Chorus, the music comes across very cleanly and is nearly exact in its replication of the original soundtrack performances. Until "Duel of the Fates". At that point, the differences become quite clear - the chorus isn't able to pull it off the way the original soundtrack does, and this saddened me greatly as it had been an exceptional performance up to that point.

Other re-recordings include The Mummy (a fine job of it), Saving Private Ryan (here the choir can handle it better than "Duel of the Fates"), and a suite from Shakespeare in Love that seemed to be lacking a bit of the harsh energy that the original soundtrack had. But it was a good performance nonetheless.

Aside from those, the rest of the album is filled with cues from the original soundtracks of many of the big films that Varese released soundtracks to over the past two years. Of significant note are The Matrix, with the great opening cue; The 13th Warrior with it's great themes, and The Iron Giant with it's great opening piece. Some of the track selections were a bit off from what I would have chosen. Instead of using "Finale / Fed-Ex Delivers" from Bowfinger, I would have gone with one of the earlier cues that have more "kick", such as "The Observatory". Instead of "Main Title" from Instinct I would have gone with the more interesting "Into The Wild". The "Main Title" cue from Payback is very reminiscent of The Taking of Pelham One-Two-Three, as indicated in my review of the film.

This makes a rather nice compilation album of some of the bigger films (and flops - like Wild Wild West and The Haunting) of 1998 and 1999. I only wish that some of the re-recordings were a bit better, and that the cue selection was a bit more robust. Beyond that, this compilation album is an adequate substitute for "Hollywood '98-'99".