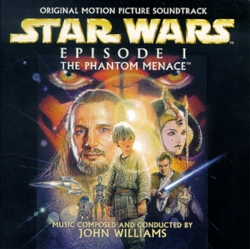 Performed by
The London Sympnony Orchestra

Sleep peacefully: the main theme which has become familiar to millions of Star Wars fans worldwide stays intact as the movie the world has been waiting for since 1983, Star Wars: Episode 1 - The Phantom Menace, opens. Even the segue from the main theme to the next strands of music remains fairly constant. Beyond that, similarities to other Star Wars scores are more subtle.

Perhaps the most significant piece of the score is track 2, "The Duel of the Fates". This is the section of music that was actually receiving some radio play before the film was released. Even though it occurs early on the soundtrack album, chronologically, it backs up some of the last minutes of the film. I say it is significant for two reasons. First is that it is an obvious departure from Williams’ scoring for the last three Star Wars films. With the exception of a one-minute piece of dark choral music in Return of the Jedi, Mr. Williams has never delved this deeply into "Omen-esque" music in his Star Wars films. The second reason I rank it as significant is because it is so very powerful. This is the section of the score that slaps you across your face and drills you to upright attention. It is powerful, deep, dark, unrelenting, and unforgiving, and I loved every minute of it!

Much of this music sounds more like an "Indiana Jones" score than a Star Wars score. I think that we can attribute this to a slight change of style in Williams’ music since the first film was released back in 1977. Since a fairly large chunk of the action takes place on familiar ground in Tatooine, that kind of desert oriented music really does not seem out of place. Other sections where it appears are in "chase" scenes. Once again, this kind of Indy/Star Wars mix works well in that environment.

The old traditional Star Wars themes can be found on this new recording, but only sparingly. A hint of "The Imperial March" here, a touch of the main "Force" theme there, but by in large we’re talking about completely new music. The choral work is especially important, and especially new. It’s brought up in track 2, the finale track, and a few others in between.

Broken down, the music for Star Wars: Episode 1 - The Phantom Menace is just good, clean fun. Sit back and enjoy it. As long as you’re not expecting to hear the same scores you’ve heard for Episodes 4 – 6, I can pretty much guarantee you’ll be satisfied. Besides, what fun would it be if nothing had changed? New characters require new themes. This music is not groundbreaking, but you’ll get a hint of your childhood again, and that’s certainly worth $12.99 at Best Buy.