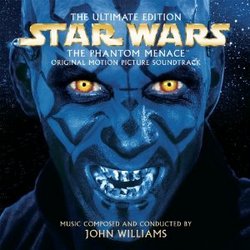 A year and a half ago, moviegoers were finally able to see the new Star Wars film. Last month, they completed filming the next film in the prequel trilogy, and this month (for some reason) the original trilogy is being re-released on VHS (for the 200th time). So now comes the Star Wars: The Phantom Menace - The Ultimate Edition Soundtrack. Containing over 120 minutes of music spanning two CDs, this album is filled with almost every bit of music in the film. Some people out there might be upset that it's not every single note, or that it's edited more or less the same way that the score was edited in the film - but that's not anything to worry about.

Those people are probably upset that 2 measures of music are missing from a particular cue, and don't really have any idea as to how music gets edited to begin with. If this album were edited exactly as it was in the film, it would be choppy. Sound effects tend to be used to cover musical edits, and since we don't have sound effects on this album, additional massaging was probably in order. The resulting music is smooth and pleasurable to listen to.

The second disc starts to get a bit darker. Anakin is freed, and after a skirmish with Darth Maul, Qui-Gon has everyone set out for Coruscant. Triumphant brass heralds their arrival where they are greeted by Senator Palpatine. After things start to go the wrong way, the Queen decides to head back to Naboo - just in time to set up an alliance with the Gungans and fight a CGI-battle against the Trade Federation. This is where things get sticky. There has been a lot of unreleased music heard until this part - and it seems to play rather smoothly. Now, however, is where last minute editing required some finessing of the score after it had been recorded. As such, there are some slight loops and edits that would have been a bit out of place when played normally. However, this album contains the score as heard in the film - so the progression is more or less following the edits. I didn't find it very distracting, however I did prefer some moments in the original "suite-based" album over the versions here. Still, the music is great to listen to, and the climactic space battle interwoven with the exciting lightsaber fight plays out very nicely.

The "End Credits" are the only places in the film where the "Duel of the Fates" and "Anakin's Theme" suites are fully heard - so it's a welcome inclusion on this album. There are two source cues also available on this album: "Street Band of Mos Espa" and "The Street Singer" (both from Disc 1). Additionally "Desert Winds", an unused cue, is also included. As a bonus, the "dialogue version" of "Duel of the Fates" is included. This is basically the music video (as seen last year) without the live-action sound effects (but with the fabricated sound effects). It's enjoyable and provides a nice "trailer" overview of the film.

The album comes with a 60-page full color booklet - containing photos from the film. There is not much in the way of liner notes, beyond a paragraph hyping up the album. Oh well - it would have been nice to have some context, but the photos will have to do. One minor (or major) gripe is that the track listings (for two CDs, mind you) appear in only one place - the inside cover of the booklet. But you can't take the booklet out, because it's glued to the tri-fold digipak case that the album comes packaged in. Yes, it's a pain to see what track you're on when you're driving - good luck!

I do have to say, however, that problems aside, the packaging does look very nice - except for the ugly blue Darth Maul on the front. But that's not enough to turn me away from the album! Another nice thing was that the tracks all flow into each other, creating virtual suites that allow you to jump to specific points. If you have the first album, and are quite happy with it, then keep it. But if there are specific cues you wanted to hear from the film, you'll most likely find them on this album.