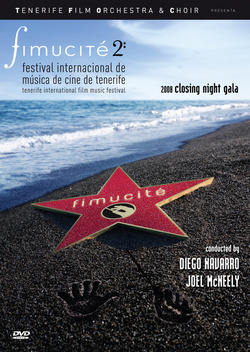 On June 29, 2008, the second annual Fimucité music festival came to a spectacular end with an extraordinary film music celebration. A selection of some of film music's greatest classics was performed in concert by Diego Navarro and Joel McNeely with the Tenerife Film Orchestra and Choir at the Auditorio de Tenerife.

The concert was a tribute to the recordings of Robert Townson, dubbed IN SESSION ... IN CONCERT, the evening featured music from Star Trek: The Motion Picture, Out Of Africa, Vertigo, Patton, Body Heat, Psycho, Taras Bulba and Saving Private Ryan alongside a special tribute to Alex North's 2001: A Space Odyssey. Two very special encores closed the concert. First was an emotionally powerful tribute to the great Jerry Goldsmith in a stunning performance of Camelot Lives from First Knight. Second, to blow the roof off the place, Navarro conducted Duel of the Fates from Star Wars Episode I: The Phantom Menace. This 2-disc set contains both a DVD of the thrilling concert and an audio CD to present the music itself in the best possible sound.

Few film music concerts are available to be enjoyed by anyone who didn't attend the event. Take advantage of this rare opportunity to actually see Joel McNeely conduct some of the signature cues from his award-winning recording series of classic film scores, including Bernard Herrmann's Vertigo and sycho!

The Canary Islands are a long way away for many people so here's a chance to see what's been going on there, this from the second year of the four year old festival.