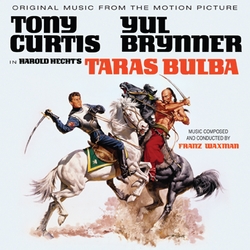 From the rousing main title, to the astonishing almost twelve-minute finale, Franz Waxman's Taras Bulba is filled with one glorious cue after another, and features one of his most beautiful and incandescent melodies in "The Wishing Star"—every time that theme makes an appearance in the score is utterly magical.

The original LP release was a re-recording, as was the fashion in those days. The sound on that release was dry and shrill, and the sonics were further compromised because for an LP release, it was longer than usual. A CD was issued on Ryko back in 1998 (long out-of-print)—that CD was mastered from the original album masters and, while well produced, still had dry and shrill sound.

For this brand-new edition, we were lucky to uncover the original three-track session master of the album takes—in other words, the first generation tapes. While still dry and shrill, the tapes were in perfect condition and the clarity was astonishing.

For the first time, we've added some subtle and necessary room ambience, so that the instruments don't sound like they were recorded in a tiny closet with no air around them, and we've added the missing low-end, which basically alleviated the shrillness without losing any of the punch or the bite of the incredible-sounding brass. We hope you'll agree, that this is Taras Bulba sounding better than it ever has.

Also found on the three-track master was the instrumental-only track to "The Wishing Star" and a female-only chorus version of the song (on the album it's male and female). We've included these as bonus tracks.