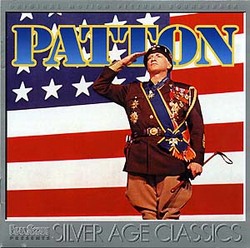 Patton / The Flight of the Phoenix

Review: Patton / Flight Of The Phoenix

by David A. Koran January 27, 2000
4 / 5 Stars
For most soundtrack fans, when a formerly unavailable original soundtrack is released in it’s entirety, they rise up and cheer. However, notwithstanding the other Film Score Monthly Silver Age releases, this version of Patton, in my opinion, does not exactly fit the quality we’ve come to expect. Granted, there have been re-recordings and bootlegs, but surprisingly, they have somewhat better sound (less shallow), and even a bit more content. This is not to say that the addition of a second complete score, of The Flight Of The Phoenix by Frank DeVol, isn’t entirely welcome, but it’s companion could have at least matched par.

I may be a bit more critical that most, since Patton is one of my favorite films, notably for the cinematography as well as the music, but that alone isn’t the lone condemning reason. Recently Varese Sarabande did have Jerry Goldsmith conduct a re-recording for the score with the Royal Scottish National Orchestra, almost track for track of the original Fox Records LP release. The bootleg by Tsunami a few years previous had that same content as that album (a special recording done for Fox Records), with that as it’s source, sounding remarkably well. Another attempt was made for the Pioneer Special Edition laserdisc with the music in sequence on an alternate track, complete with outtakes and mistakes (an interesting listen). This CD is dissected from the work for that release, taking what sparse music Jerry wrote for this three-hour film and presenting nearly forty minutes of the score. Granted it’s the original cues, but they could have used a little studio work to clean them up and maybe sweeten the sound that would be worthy of a "definitive edition". A similar case arose with William’s Poseidon Adventure done by Film Score Monthly when other more complete and better sounding sources were elsewhere but not used due to ethical and licensing issues. Jerry’s score is great, a pure classic at the get-go, and would be recommended to add to your collection as would the film it accompanies.

To stick with the triumph of the human spirit theme on this album, Frank DeVol’s entry is The Flight Of The Phoenix. A sort of cross between Alive and The English Patient (if only for the use of planes and desert) where a band of drill workers crash in the desert an have to band together to leave their predicament. In my mind, DeVol’s most notable credit to-date was his work on The Dirty Dozen but this is a worthy accompaniment, with great and exciting cues. The film itself is not an easy one to find a copy of and you may get lucky catching it on TNT or TBS during their "Nitro" or "Movies For Real Men" nights. This kind of makes it tough to actually compare he score in the film to that of this recording, but the layout of emotion and tension in it are formulaic to guess by track name and film storyline. DeVol’s work on this score sounds better than its companion on the album, with a deeper overall mix and less residual "hiss". I do find that many of the 1960s through early 1970s films had strange sounding brass recordings, somewhat muted and muddy, which could because of the miking or the dynamics of the recording medium. As a former trumpet player, I tend to over-notice such things but do compare their sound to much of what we would later hear in John Williams use of brass in the mid and late 1970s.

Overall I would have to say that this is the weakest of Film Score Monthly’s releases, and have noticed previously and since that this is most likely an anomaly. It’s nice to see a group take an interest in restoring both popular and even some hidden gems among film score libraries in Hollywood, and hope the trend continues.