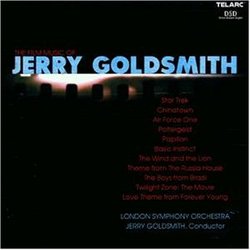 The Film Music of Jerry Goldsmith

A new compilation album of Jerry Goldsmith music just came out from Telarc Records.  With Goldsmith conducting the London Symphony Orchestra, can you go wrong?  In a nutshell, no.  Starting off with his classic main theme from Star Trek: The Motion Picture, the energy in the performance is definitely running high, but I wasn't so thrilled with the sudden drops in orchestra's output levels. It's not a CD mastering issue - it's the performance itself.  It just felt odd, since other parts were high on energy.  But with the super-long (over 18-minutes) "Motion Picture Medley", some of the energy is drained.  From classic scores like The Sand Pebbles and Chinatown to more recent projects like Basic Instinct and Air Force One, the suite very well done.  But as is the case with most re-recordings, I find I prefer the original album - it's just my tastes.

Goldsmith's score to The Russia House is still a favorite of mine, and it is nice to see the inclusion of the main theme on the album.  His excellent score to The Boys from Brazil also makes an appearance, in suite running about seven-minutes long.  It's well done, and the emotion really comes through in the performance.  A Goldsmith score I've never had much affinity for, Sleeping with the Enemy is a nice theme, but it really doesn't do much for me.

The "Medley of Television Themes" is great.  Just as he had done on the "Suites and Themes" album years ago, Goldsmith smoothly transitions from "The Man from U.N.C.L.E" to "Dr. Kildare", "Room 222", "The Waltons", and "Barnaby Jones" - but this time it's updated with the inclusion of "Star Trek: Voyager".  It's a good performance, but I like the "Suites and Themes" one better.  Goldsmith's excellent scores to Rudy, The Twilight Zone, and Forever Young also make an appearance on the album.   But no Goldsmith compilation album would be complete without the inclusion of his suite, "The Generals".  With music from MacArthur and Patton, this suite is truly a display of military might through music.  It's an excellent way to end the album.

What can I say? It's another Jerry Goldsmith compilation album.  While similar in tone to the very hard to find "Suites and Themes" album (performed by the Philharmonic Orchestra), it stands very well on its own.  It's also a lot cheaper, since the "Suites and Themes" album goes for well over $100 if you can find it.  Pick this one up for a sampling of Goldsmith's work, but do try to get your hands on the original releases.