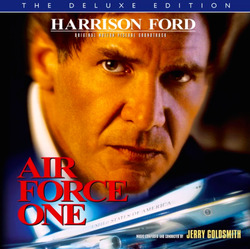 Air Force One - The Deluxe Edition

The #1 most requested CD Club title is finally here! Air Force One: The Deluxe Edition with music composed and conducted by Jerry Goldsmith. 46 tracks across 2 CD's!

In scores resounding with patriotic brass and militaristic action, Jerry Goldsmith memorably saluted America's brothers in arms. His themes embodied generals in service to God and country (Patton, MacArthur), men fighting for survival in an America gone astray (First Blood, Capricorn One), an analyst pitted against enemies both foreign and domestic (The Sum of All Fears) and a peace-seeking president combating a coup (Seven Days in May). But no noble warrior that Goldsmith accompanied had faced the impossible odds of a commander-in-chief evading terrorists aboard 1997's Air Force One. Demanding all of the excitement, emotion and suspense that Goldsmith could muster in a mostly confined setting, it was a film that put the composer in his own heroic race against time. Recorded in a span of only three weeks, (with additional music from Joel McNeely), Air Force One stands out as one of the signature highlights in Jerry Goldsmith's unparalleled career.