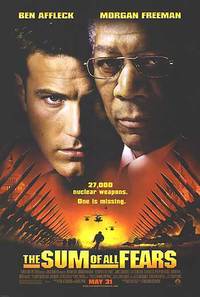 The Sum of All Fears

Review: Sum of All Fears (Blu-ray), The

Finishing off the Jack Ryan Anthology is the 2002 "prequel", The Sum of All Fears.  I say "prequel" in quotes, because it\'s more of a reboot of the franchise, rather than an actual prequel.  The film takes place in modern day (2002), but all the characters are younger.  Jack Ryan (Ben Affleck) is now a low-level analyst for the CIA, reporting to the Director of Central Intelligence William Cabot (Morgan Freeman).  Presented as a cautionary tale, The Sum of All Fears involves a neo-Nazi group\'s efforts to instigate a war between Russia - which is dealing with post-Soviet shrinkage - and the United States.  As Ryan slowly uncovers the plot, tensions rise between the two superpowers, leading to the brink of war.

Directed by Phil Alden Robinson (Field of Dreams), the film succeeds due to the strength of the supporting cast members, including Freeman, Ciaran Hinds, Liev Schreiber and James Cromwell. Affleck just doesn\'t do the character justice; it feels like he\'s playing the same role in every movie.  His portrayal of Ryan just isn\'t interesting.  The book was incredibly long and densely packed with information, and the film had to strip a lot of the details out and make changes, including changing the villains from Palestinian terrorists and radical Germans, to neo-Nazis.  In the hindsight of trying to make the whole story work within two hours, it makes sense.  That doesn\'t make the film that much better, though.  When compared with the previous three Jack Ryan films, The Sum of All Fears feels "safer" and less punchy. It\'s by no means a bad film, but it\'s not a movie I\'m likely to watch much after this review.

Released on DVD in 2002, The Sum of All Fears has the most extras of the Jack Ryan films, and probably the best transfer.  Shot in 2001 and released in 2002, the film certainly enjoys the accoutrements of modern film stock, with light grain and good color saturation.   It\'s not a reference quality image, with some slight digital noise reduction that softens the image.  Audio is presented in English 5.1 Dolby True HD, and French/Spanish 5.1 Dolby Digital.  The soundscape is much more immersive than the previous Jack Ryan films, with a solid surround-sound track that effectively places the viewer in the middle of the action.  Jerry Goldsmith\'s score is crisply replicated as well, and the main title aria is as gorgeous as ever.

The Blu-ray ports over all the extras from the DVD release, which is a lot more than what was on the other films.  First up we have two commentary tracks: one by director Phil Alden Robinson and cinematographer John Lindley, and another one by Robinson with author Tom Clancy.  The first one is decent, with good production information and the like -but the second one is the one to listen to.  Clancy, who also executive produced the film, takes a no-holds-barred approach to the film, talking about what changed from the book, what works and doesn\'t work, and other blunt candid comments. It\'s a treat, and I only wish he had provided commentary for the other three films. (Maybe a double-dip in the future, eh Paramount?)

Also included are two featurettes on the casting and production of the film, totalling 30 minutes.  It\'s interesting to hear the filmmakers discuss the decision to go with a younger Jack Ryan after Harrison Ford turned down the script they had written for him, and Robinson discusses the challenges in having a rather hefty novel adapted to the screen (including the aforementioned controversial change of villains).  Even a discussion of post-9/11 reaction to the film is explored, but nothing about the music.  Oh well.

There is a post-production featurette though, focusing exclusively on the visual effects and showcasing the work of Rhythm & Hues. It\'s good stuff, running about 30 minutes, although the effects themselves aren\'t groundbreaking and don\'t really need all the detail they go into.  Finally, the theatrical trailer for the film is included in HD.

The Sum of All Fears is probably the weakest in the Jack Ryan series, and as we know by now, the idea that it would allow them to create a new franchise didn\'t exactly go as planned.  As far as presentation goes, it has good image and audio quality, and a relatively solid set of extras, the highlight of which is the Clancy commentary.  Worth a rental, if you haven\'t seen it - but definitely check out the Clancy track.