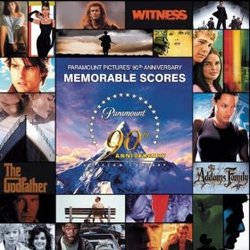 This year Paramount Pictures is celebrating their 90th Anniversary as a film studio.  To commemorate this notable event, they've redesigned their film logo, and teamed up with Sony Music to release a collection of what they consider their most "Memorable Scores."  This two disc compilation contains themes from 42 of Paramount's films from over the years.  While it's a rather solid representation of their film library, there are some rather notable scores missing from this collection, and there are some choices that made me scratch my head.

The collection starts off with John Williams' "Hymn to the Fallen" from Saving Private Ryan. From there we jump back to Miklos Rozsa's 1944's classic film noir score to Double Indemnity. (I wonder, were there no film scores prior to 1944 that were "memorable" enough for inclusion on the album?)  We then start moving forward through time, snatching at selected scores.  Most of them are what you would expect: Sunset Boulevard, The Ten Commandments, Breakfast at Tiffany's, Love Story, Chinatown, and Star Trek: The Motion Picture.  While I am a big fan of Nino Rota's score to The Godfather, I don't really think we needed to hear both themes (taking up two tracks) in addition to the entire "End Titles" from The Godfather: Part II.  I'm sure (nay, I know) that there were some other scores that could have gotten some playtime here. But, I'll get to that later.

We enter the 1980s with Raiders of the Lost Ark, and then it's on to the moving theme from Terms of Endearment.  That heralds a slew of synth-enhanced scores, including Flashdance, Beverly Hills Cop, Witness, Children of a Lesser God, and Fatal Attraction.  There's plenty of orchestral drama as well: The Untouchables, Dead Again, The Firm, Braveheart, Clear and Present Danger, and Primal Fear all make an appearance.  The Addams Family and The Rugrats Movie are the only comedy scores on the set, which is a shame considering the enormity of Paramount's comedy film library.  (More on that later.)  It's not surprising that Titanic shows up here, but the last few tracks have me wondering.  Sure Rules of Engagement and Mission: Impossible II were decent film scores, but was Lara Croft: Tomb Raider really that memorable?  Or Nancy Wilson's score to Vanilla Sky? Certainly it makes sense to put on The Sum of All Fears as the "capper," given it was the most recent Paramount film at the time of the album's release, and including Alan Silvestri's score to Forrest Gump at the end was a pleasant way to conclude the album.

Overall, this album does a nice job in giving the listener a brief sampler at the long legacy of film music in Paramount's rich history.  But as mentioned before, there are some gaps.  Where is The Hunt for Red October, or A Simple Plan?  In the comedy area, where are any of the Zucker Brothers' films (Airplane!, The Naked Gun)?  Where are any of the John Hughes comedies?  Where is South Park: Bigger, Longer & Uncut?  While it would have been great to really make this a comprehensive album, it would have been rather costly, and probably run 3 or 4 CDs long.  Still, this griping aside, pick this one up if you're looking for a good sampler of Hollywood film music.