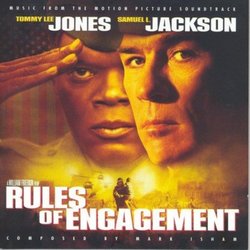 What defines "proof"? Sometimes the evidence presented at trial might be compelling enough to render a verdict, but many times there is a story beyond the evidence, and when the evidence is lost or destroyed, the testimony of the accused might be all they have to prove innocence. This angle to a courtroom drama is taken in the hit Paramount Pictures film, Rules of Engagement. The film stars Samuel L. Jackson as a Marine accused of slaughtering 80 Yemenites who were attacking the American Embassy. Tommy Lee Jones is the Vietnam buddy who defends Jackson and investigates the conspiracy of buried evidence that might prove his justification as mandated by the rules of engagement.

Directed by William Friedkin, Rules of Engagement features a score by award-winning composer Mark Isham. Based on his earlier composition, "On The Threshold of Liberty", the score has plenty of subdued moments that work excellently in the film to increase the dramatic tension, as well as a musically military structure necessary in a film with some excellent action sequences.

The score begins with (as one would hope from Mark Isham) with a lovely trumpet solo, based on "On The Threshold of Liberty", with some subtle string accompaniment. Once the solo reaches its climax, the powerful military percussion (snare drums) kick in, as one could expect. There are plenty of tense dramatic cues, such as "Gulf of Arden (USS Wake Island)", "Back to the World", and "A Breach of Peace". Some of the cues are full orchestral compositions with the expected trumpets mirroring the main theme, and other cues are rather atmospheric cues with plenty of quiet moments causing me to wonder if the cue was ending or merely on pause. It tended to be the later, as the music would kick back in moments before I checked the player to see if it got stuck for some reason.

Overall, this score was rather enjoyable to listen to, although it didn't really stand out in the film as an exceptional score. The music worked very well in the movie, but considering the absolutely stunning sound mix on the film, I felt that at times the score was either overstated or understated depending on the scene. For the most part, however, it worked well and provided plenty of dramatic tension where necessary - and there is plenty of it!

Released by Milan Records, this album runs about 40 minute long. It contains three tracks of music that were not contained in the film (but contain themes that did show up in the film - but not on the album), as well as the original 1983 recording of "On The Threshold of Liberty". It was really interesting to listen to this last track, as it basically provided the inspiration and base for the rest of the score - ultimately it's highly recommended listening.