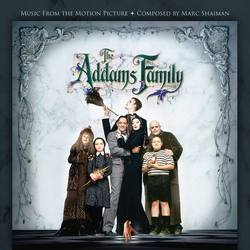 Paramount Pictures, UME and La-La Land Records are proud to announce the expanded and remastered edition of Marc Shaiman's The Addams Family score. Filled with lush and exciting themes, Shaiman's sweeping orchestral score dances about with such glee you can't help but smile while listening to his masterpiece. Clocking in at 70 minutes, this new and improved limited edition cd features tons of music never before released including tracks that were recorded for the film but didn't make the final cut.