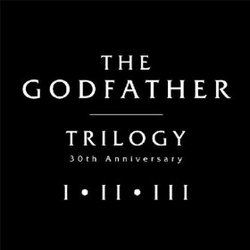 Probably one of the greatest films about organized crime, The Godfather is a classic tale of Michael Corleone's (Al Pacino) rise to power when he takes over his father's organized crime empire.  The music from the film won a Golden Globe and British Academy Award and was nominated for an Oscar, but then deemed ineligible due to composer Nino Rota's reuse of a theme from Fortunella.  Nonetheless, the three main themes from the film are as classic as they come, and almost everyone who has heard them can hum them.  Not so memorable, but just as classic, are the new themes Rota wrote for The Godfather: Part II.  Carmine Coppola then took over scoring duties 16 years later for The Godfather: Part III.  These three film scores are explored in the latest compilation album, The Godfather Trilogy.

The album begins with the classic "Godfather Waltz", then followed by the equally memorable "Love Theme from The Godfather".  A few dramatic and tense cues along with some Italian source "party" music (mainly heard in the wedding scenes) composed by Carmine Coppola follow.  With a big choral finale, the first chapter in this epic saga concludes.

Continuing the style of the first film (and even arguable better than its predecessor) The Godfather: Part II carried on two storylines at once: the expansion of Michael Corleone's empire counter juxtaposed with flashbacks of a younger Vito Corleone (Robert De Niro)'s rise to power.  Musically, Rota stayed in the same area as the first film, but with a more dramatic and classical angle, as heard in "The Immigrant".  Piano features prominently in "Kay", and once again a Coppola "source" cue makes an appearance.

The third time around, Michael Corleone is older, and trying to get out of the mob business.  But, as he so eloquently pointed out, every time he thinks he's out, they pull him back in.  Musically, Coppola took over (Rota had passed on 11 years before), and while the classic themes made appearances, Coppola took the opportunity to lend his own style to the music, while retaining Rota's spirit.  The first two cues ("Marcia Religiosa" and "Marcia Festa") are still "source" cues, but the Love Theme is all new, and very tender and emotional.  "Intermezzo" is similarly dramatic and lush; it almost makes you forget Sophia Coppola was in the film.  It's not out of place with Rota's work, and serves as a tender homage to his style from the first two films.  Pietro Mascagni's "Preludio from Cavalleria Rusticana" makes an appearance on this album as well, having served as the background music for the violent end to The Godfather: Part III.

The album is performed by the City of Prague Philharmonic (with the Crouch End Festival Chorus) conducted by Paul Bateman.  The performances are wonderful and well done.  It is obvious a lot of thought and care went into this album, and the liner notes are rather informative.  The only thing that felt a little off-putting was the decision to use an actual mob murder crime scene photograph (complete with a dead man covered in blood) for the cover.  It's no wonder they put the jewel case in a slipcover!  Still, this 52-minute long album is a great overview of the music from this classic trilogy, and if you don't have any of the other albums, I would strongly urge picking it up.  It's an offer you can't refuse.