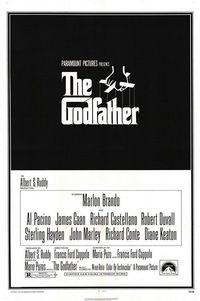 Released with much acclaim and anticipation on DVD back in 2001, the Godfather trilogy featured the three Francis Ford Coppola films over four DVDs, and a fifth DVD of solid extras. Faced with a deteriorating negative, in 2006 Coppola implored Steven Spielberg (whose Dreamworks was a part of the Paramount family) to use his clout to push forward with a restoration of the classic films. Indeed two years later, restored by Robert A. Harris of The Film Preserve (who worked on the Lawrence of Arabia and Vertigo restorations), the Godfather trilogy finally hits the market on Blu-ray disc, in what is likely to be considered the ultimate presentation of the films.

The Godfather chronicles the downfall of mob boss Vito Corleone (Marlon Brando) and the rise of his reluctant son Michael (Al Pacino) in his place, during the 1950s. The Godfather Part II (one of the rare instances where a sequel is better than the original) continues the epic story, taking us to the past to show Vito Corleone\'s (Robert De Niro) rise to power as a new immigrant to America from Sicily at the turn of the century, as well as continuing the story from the first film with Michael\'s expansion of power into the political realm, and Cuba, just before the revolution. Finally, The Godfather Part III takes place in the late 1970s, and follows Michael\'s attempt at redemption through religion, but he can\'t quite escape the life of crime he\'s established for his family.

The first two films have been painstakingly restored, frame by frame, and it shows. (The third underwent a nice remastering.) The look of these films, as determined by cinematographer Gordon Willis, was to evoke the feeling of an old photograph. High contrast, with whites blown out, and shadows completely dark, grain is apparent but not obtrusive. Colors seem a bit high on the saturated side, with skin tones looking more orange than natural, but that goes more towards the "old photograph" style. Since Gordon Willis consulted on the restoration, I can only imagine that this is exactly what he intended it to look like. The restoration was not 100% a cleaning effort either - there are the occasional specks of dirt, but they\'re hardly noticeable and when compared to the 2001 DVD, it\'s immediately obvious how great these Blu-rays look. There is detail in the shadow, which was completely missing from the DVDs. The image is hardly going to be considered a reference quality one, but it is the best these films have looked. For the third film, they remastered it to help match the black levels of the previous two films, so that there is more of a continuity throughout.

All three Godfather films are given the full 5.1 Dolby TrueHD treatment, but it doesn\'t make much of a difference, except for the occasional sound effect, and some of the music, most of the audio is very much front and center. For purists, the original English mono track is included (for the first two films), as well as French and Spanish 5.1 tracks. The third film benefits most from the 5.1 track, since in 1990 it was more common to use the rears to enhance the sound field. It\'s not a reference quality track, but is satisfactory and gets the job done.

The supplements are where things really get cracking. First and foremost, the best supplement on these discs remains the original 2001 DVD feature-length commentaries by Coppola himself. The stories he tells about the productions, problems encountered, and even criticism and controversies (especially regarding the casting of his daughter Sophia Coppola in Part III) are all addressed, and it makes for a fascinating dissertation on these films. The fourth Blu-ray disc contains all of the 2001 DVD supplements, as well as some new features created exclusively for the new release.

"The Masterpiece That Almost Wasn\'t" is a 30-minute featurette that goes in depth into the circumstances that were present in the early 1970s that allowed The Godfather to be made. New interviews with such Hollywood heavyweights as Steven Spielberg and George Lucas are included, as well as comments by director Francis Ford Coppola, sound editor Walter Murch, and many others who were directly involved with the creation of the film. "Godfather World" runs about 12-minutes long, and shows us interview bits with a slew of Hollywood\'s finest all talking about the influences that the Godfather films have had on modern filmmaking. The most interesting extra, "Emulsional Rescue: Revealing The Godfather" runs almost 20-minutes long, and goes into great detail about the restoration process that helped save the films, and made them look as good as they do today. "When the Shooting Stopped" is a 15-minute look at post-production and editing challenges on the first film. An odd supplement, "The Godfather on the Red Carpet" features various celebrities commenting on the films, taken from the Cloverfield premiere. The misleadingly labeled "Four Short Films on The Godfather" section features not four short films, but really four short featurettes featuring interview outtakes that wouldn\'t really fit into any larger segments. (The four segments are "The Godfather vs. The Godfather Part II", "Cannoli", "Riffing on Riffing", and "Clemenza".) All of these extras are presented in full HD.

Released on the original 2001 DVD but repurposed for HD is "The Family Tree / The Crime Organization" - a handy breakdown of the relationships (and various rap-sheets) of all the primary characters encountered through the trilogy. As mentioned above, all of the 2001 DVD supplements are included on this disc, in a section labeled appropriately enough to indicate it. "The Godfather Family" is a 75-minute long documentary that was produced during The Godfather Part III, so it doesn\'t have the hindsight that a newer documentary might have, but it still goes into great detail on the films (with more of an emphasis on the first two, obviously). Seven featurettes cover various aspects of the productions: "The Locations of The Godfather" (locations), "Francis Coppola\'s Notebook" (novel vs. screenplay, and influences), "The Music of the Godfather" (two featurettes, one on Nino Rota and another on Carmine Coppola), "Puzo and Coppola on Screenwriting" (development of the epic saga), "Gordon Willis on Cinematography" (a brief discussion about the look of the film), and finally the original 1971 "Making of The Godfather" featurette, which is basically a dated EPK piece.

A seemingly random collection of "Storyboards" is included as well as an extensive collection of "Photo Galleries", theatrical trailers (in HD), Academy Award acceptance speeches, and other promotional bits. Finally, the bulk of the disc is taken up with nearly an hour of "Additional Scenes" grouped through a "Historical Timeline". Most of these scenes were used in the "chronological" television version of the film, and are presented in standard definition. A shame these couldn\'t be restored either, and the deleted scenes from Part III have an annoying workprint "Property of Paramount" burn-in on the screen the whole time.

Overall, this is the best presentation that the Godfather films will be likely to get on home video. The new supplements are great, and the old supplements are still excellent - this is a no brainer, and if you don\'t already have a Blu-ray player, then The Godfather: The Coppola Restoration should be enough of a reason to upgrade right away.