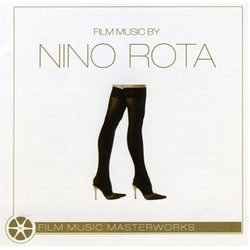 Bittersweet. That is Nino Rota in a word. More than any other composer I can think of, he captures that delicate balance between the nostalgia and sadness. In the ranking of great Italian composers, Rota is second to only Ennio Morricone in terms of influence on the music industry. While most people remember The Godfather or maybe his Romeo and Juliet theme, his influence on other composers is immeasurable. What he managed to do is find the razor\'s balance between classical and modern Italian music. Of course you can combine opera, jazz and circus music. Who says you can\'t? His scores are playful, satirical and heartbreaking honest all at the same time. There wouldn\'t be Danny Elfman for starters and James Horner wouldn\'t have had a theme for Honey I Shrunk the Kids ("Amarcord – Suite").

This Silva Records could be called the Nino Rota/Frederico Fellini compilation. Over half of the album is devoted to their collaborations, from La Strada through Il Casanova. The Film Music Masterworks series has been building quicklyand you could say this about most of the series, but if you haven\'t really listened to Rota before, this would be a fine place to start.

The City of Prague Philharmonic Orchestra again delivers a powerhouse performance. The orchestra is strong and Rota\'s classical style plays right into their strong suit ("Nile Journey" and "The Taming of the Shrew – Overture"). "Legend of The Glass Mountain" and The Godfather tracks which bookend the album shows off the robust string and brass sections they have.
But that comes to a disadvantage in some the solos of the Fellini tracks ("Otto E Mezzo" and "La Dolce Vita"). It needs to be more homely or... um, ramshackle I guess would apply. The strength of Rota\'s pieces are the contrast between a small ethnic instrument and the force of a large orchestra fanfares. There should be utterly chaos at the end of 8 1/2, butthe Prague Philharmonic is too clean and pristine.

This has been a common problem with these albums, but like their other releases it is not enough to over shadow any of the tracks. This release remains a resolute recommendation. I love alliteration.