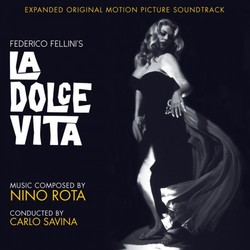 Fellini once described his film as "a veritable Tower of Babel" because of the many languages spoken in it, and Rota's score for La Dolce Vita is its own Babel of genre—a grab bag of melancholic orchestral music, jazz, light pop, rollicking rock, circus fanfares, dances, pastiches and cultural references. Nino Rota provides a beautiful underscore, almost phantasmagorical, to illustrate the empty streets of Rome, the solitude of the next morning, the world of luxury, decadence and lust that seems to end.

A 40-minute LP of the soundtrack was released on RCA Victor in 1961 and reissued many times on CD by C.A.M. For this premiere complete edition, we have included the complete 77-minute score on CD 1. On the second disc we have included more than 35 minutes of previously unreleased music with lots of alternates and music written by Rota that was not used in the final print of the movie, as well as the original album. The entire project has been produced by Jose M. Benitez, supervised by Claudio Fuiano, and carefully restored and mastered by Chris Malone from the first-generation master tapes—originally recorded in mono—courtesy of Gruppo Sugar. The original album has also been reconstructed by Mr. Malone from the original session tapes and now sounds better than ever.

The package includes a richly illustrated 20-page booklet with liner notes by Tim Greiving, who offers a detailed analysis of the film and score, including quotes from exclusive interviews with film critic A.O. Scott and composer Alexandre Desplat.