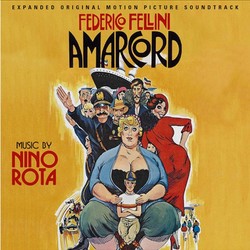 Quartet Records and Gruppo Sugar present a mammoth 2-CD set presenting for the first time ever the famous original score by Nino Rota for Federico Fellini's masterpiece Amarcord, awarded the Oscar for Best Foreign Film in 1973, and also nominated for Best Director and Best Original Screenplay.

Often hailed as Federico Fellini's most personal movie despite the director's vehement denial, Amarcord is arguably one of his most beloved "confessions." Telling the story of life in Rimini from winter to autumn, Amarcord presents Fellini's own recollections of his upbringing in an Italian town. The episodic story focuses on a mischievous boy named Titta who, in typical Fellini fashion, lusts after big-breasted women, tries to woo the town's most beautiful girl and find his place in Fascist Italy—all accompanied by an infectious Nino Rota score.

"Almost all of Amarcord is a macabre dance against a cheerful background," said a contemporary review of the film, and Nino Rota is in peak form providing the music for this mesmerizing dance. By mining the rich musical world of 1920s and 1930s jazz and big band music, Rota fashions a creative, engaging score that is nostalgic for an era that never really existed—it only flourishes in the director's memories of his childhood. Almost every film score lover is familiar with the wistful main theme, and this is the first chance to hear exactly how much music Rota actually provided for the film.

A 30-minute LP of the soundtrack was released on CAM in 1973 and reissued many times on CD by the same company. For this premiere complete edition, we have included the entire 50-minute score on CD 1. On the second disc we have included more than 30 minutes of previously unreleased music with lots of alternates and music written by Rota that was not used in the final print of the movie, as well as a remastered version of the original album. The entire project has been produced by Claudio Fuiano and Jose M. Benitez, with painstaking DDP mastering by Chris Malone from the first-generation stereo master tapes courtesy of Gruppo Sugar.

The package includes a richly illustrated 16-page booklet with liner notes by Gergely Hubai, who discusses the making of the film and the score alongside selected images from the picture.