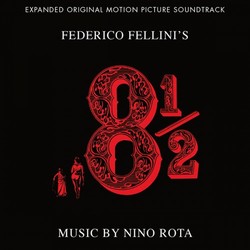 Quartet Records and Gruppo Sugar proudly present a 2-CD set with the premiere release of the complete score composed by Nino Rota for Federico Fellini's classic 8˝. Starring Marcello Mastroianni, Claudia Cardinale, Anouk Aimée, Sandra Milo and Barbara Steele, the film is about a harried movie director who retreats into his memories and fantasies. Being one of the most personal and introspective films of Fellini, the movie was a big international success, winning the Academy Award for Best Foreign Language Film in 1963 and appearing on many film critics' lists of the best movies ever made.

Nino Rota's original score is one of his most popular, and the cue "La Passarella d'addio" was immediately identified as the quintessence of his collaboration with Fellini, due to its blend of nostalgia and circus music. But the score is much more than this theme. Most of the music has a carnivalesque, vigorous quality, from source music based on swing, galop, waltzes and dance music, to dramatic, nostalgic and even mysterious sounds.

A 40-minute LP of 8˝ was released on CAM in 1963 and reissued many times on CD by the same company. For this premiere complete edition, we have included the 66-minute score on CD 1. On the second disc we have included more than 20 minutes of previously unreleased music with alternates and music that was not used in the final print of the movie, as well as the remastered original album. The entire project, supervised by Claudio Fuiano, has been carefully restored and mastered by Chris Malone from first-generation master tapes—originally recorded in mono—courtesy of Gruppo Sugar. The original album has also been restored from the original session tapes.