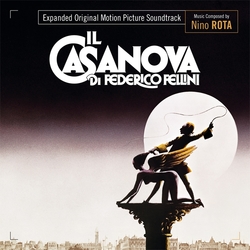 Directed by Italian Maestro Federico Fellini, Casanova is an unlikely adaptation of the legendary womanizer's autobiography. In fact, the director made sure to keep only the barest minimum on details, instead focusing on giving his own interpretation of the character. Starring Donald Sutherland, this version of Casanova is a world-weary, somewhat melancholic traveler who attends lavish masquerades and dispenses his otherworldly lovemaking skills to anyone interested. A somewhat controversial film upon its release, Casanova has since then attained a cult following due to its lavish looks (he won the Academy Awards for Best Costume) and an unlikely score by Nino Rota.

Conductor Carlo Savina (who also orchestrated most of the score due to Rota's illness) said the music was a fever dream and there's really no better way to describe it. The bulk of the score uses rare Baroque instruments to create the mysterious mood, including a glass harmonica and the oboe d'amour. Following the melancholic main titles played against the images of the Venetian canals, the score keeps up its zaniness with the music for the Magic Bird, a musical construction who follows each lovemaking session with its own chirpy tune. Other highlights and challenges include an original opera excerpt for a bizarre stage show and a cello piece so heartbreaking it makes Casanova question his ways.

Casanova has had several LP and some (slightly expanded) CD releases, but this new presentation includes two CDs worth of music, including the original soundtrack album and all the additional material, adding up to 45 minutes of previously unused music. Supervised by Claudio Fuiano, this newly remastered edition includes an 8-page booklet by Gergely Hubai discussing the film and the score, based on an interview by conductor Carlo Savina.