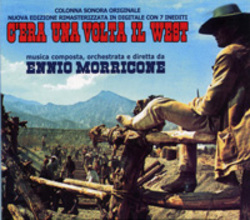 If you\'re a Sergio Leone fan, you either adore The Good, The Bad and the Ugly or you adore Once Upon A Time in the West. Now you can like/love both, but one of the two tends to have a stronger magnetic obsessive pull on people. I\'m a Once Upon a Time guy myself. It\'s in my top all-time movies list if I bothered to make one. This review is one of those excuses to write about something I love - and I adore this album. I seem to be on a Ennio Morricone kick lately as ever other review has Morricone doing something somewhere on it. So might as well go back to Maestro Morricone\'s best work.

After making his Clint Eastwood man-with-no-name trilogy (A Fistful of Dollars, For a Few Dollars More, The Good, the Bad and the Ugly), "spaghetti western" auteur Sergio Leone reluctantly went back to the genre he mastered to make a definitive statement on the Western. Once Upon a Time is a hyper-charged version of compendium of great westerns moments. It would be the first post-modern take on a western with countess references to past classics including John Ford movies, Johnny Guitar, Shane and dozens others (check the film\'s Wikipedia page forspecifics). The only modern comparison that could be made is to a Quentin Tarantino movie. It is a film drenched with the potential of random, nasty violence, movies, filled of ironic, clever dialogue and made with a pure love of cinema.

Like opera, the story\'s characters are presentational. They represent the icons of the western (the mysterious gunslinger, the cold blooded bastard that wears black, the lovable rouge bandit, the railroad baron) and most of the time, they talk very... very... slowly and tersely. Ennio Morricone\'s music is their dialogue, their arias. Morricone wrote all of the main themes in advance. Leone played a tape of Morricone\'s themes on the set, so that actors could follow the rhythms of their music. The clip-clopping piano and banjo melody of "Cheyenne" tells us immediately that he is "the tramp," a sweet, romantic character. The theme, which Morricone wrote by instinct, is a musical cliché but he played against expectations by adding in an electric piano for the repetition and breaks up the rhythm with unexpected pauses (for un-predictable moments in the film). Jill, the heart of the story is represented by a soulful female vocal and string section while railroad tycoon Morton has a six note piano motif descending on a scale in contrast to a mournful string section, indicating his pained unfulfilled dreams. These are some of the best indicative character themes and motifs ever created.

Like For a Few Dollars More, a small musical instrument is used both as a motif for a character but also as a key character prop with the movie. Our "hero" Harmonica (Charles Bronson) plays an ominous seven-note motif repeatedly, insistently in a majority of his scenes, announcing his ghostly presence. While the harmonica is a nostalgic campfire instrument, Leone wanted it to be played sinisterly with hands cupped over the microphone in the style of a blues musician. The sheer repetition of this motif could drive some mad, but the purpose is to show Harmonica\'s unwavering obsession with the villain Frank (Henry Fonda). Frank\'s own cruel electric guitar motif plays in direct opposition to Harmonica\'s (in "Man with the Harmonica" and "Final Duel") linking the two characters as destined to confront one another.

This is also the slowest of Leone\'s westerns, more visually based than any of his other films. Musically, this would also be different from Ennio Morricone\'s previous Leone scores. There would be no grunting chorus, no pistol shots, whip cracks to create the driving rhythms. Morricone divorced himself from the very style that made him famous to create something more stately more emotionally dense in the style of romantic minimalism. This is the moment where Morricone grew from a brilliant upstart composer into the great composer he is today.

This foreign release is as pitch perfect as possible. Finally we have the whole pasta, so to say. This baby has everything including additional tracks of source music like "Bad Orchestra" with a slide-whistle, tuba, banjo and violin. The packaging has plenty of pictures, but no text. Be careful though. If you haven\'t seen the movie, there\'s a big spoiler on the very inside of the packaging. And if you haven\'t seen the movie, what\'s wrong with ya?

An interesting final note: Morricone composed music for the opening 10-minute sequence but through discussions, he and Leone decided to create a score of "natural sounds." Understandably not included on the album, this foreboding sequence highlights Morricone\'s skill with off-putting eclectic noises. The squeaking of a windmill, the clacking of a telegraph, the dripping of water and the buzzing of a fly slowly build tension in thrilling and humorous style.