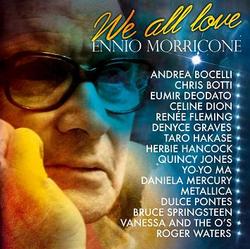 We All Love Ennio Morricone

Review: We All Love Ennio Morricone

At the 2007 Academy Awards, the presentation of Ennio Morricone\'s honorary lifetime achievement award took nearly thirteen minutes. At a ceremony where time is at a renowned premium, and where Martin Scorsese took only two minutes to accept his first Oscar, it said a lot about the esteem in which Morricone is held both within the film industry and right around the world.

As if we needed confirmation of that fact, this lovingly crafted tribute album brings together an astonishingly diverse line-up of artists to pay homage to the work of this gifted and prolific composer. The album\'s title works on two levels, explaining the collective admiration held by the contributing artists, as well as offering a statement on the universal appeal of Morricone\'s work. The album itself doesn\'t always make the music shine as it should, and some of the interpretations will ruffle the feathers of purists, but it adds up to a reasonably satisfying whole with more hits than misses.

Part of the reason why Morricone\'s Oscar presentation took so long was Celine Dion\'s premiere performance of a new version of "Deborah\'s Theme" from Once Upon a Time in America, set to lyrics by Alan and Marilyn Bergman and featured as the opening track here, under the new title "I Knew I Loved You". The Bergman lyrics ride a fine line between cliché and respectful restraint, neither overpowering Morricone\'s theme nor adding any real depth. More than anything, the song serves as a reminder of Morricone\'s gift for richly emotive melodies and of Dion\'s talents as a vocalist.

Somewhat inexplicably, considering the sheer volume of music Morricone has produced, the album\'s seventeen tracks showcase music from only twelve of his scores. Two tracks are drawn from the soundtrack to the 1990 TV mini-series Voyage of Terror: The Achille Lauro Affair. Renee Fleming\'s breathy, aching soprano on "Come Sail Away" doesn\'t quite gel with the song\'s sentimental lyrics while Denyce Graves\' rich mezzo-soprano seems too refined for the bluesy style of "Could Heaven Be". Other contributions from classical artists include Yo-Yo Ma\'s precise interpretation of the theme from Maléna, and violinist Taro Hakase\'s sublime take on "Addio Monti".

Apart from the Voyage of Terror tracks, Morricone\'s television work is represented by two tracks from Nostromo, the 1997 adaptation of Joseph Conrad\'s novel. Andrea Bocelli acquits himself well, if unremarkably, on "Conradiana", while Morricone\'s own arrangement of "The Tropical Variation" demonstrates his ability to make more of less, the instrumentation stripped back to give maximum impact to sudden bursts of full orchestra. It\'s one of the album\'s highlights.

Further highlights include Dulce Pontes\' impassioned rendition of the theme from La Luz Prodigiosa and Morricone\'s octave-jumping piano arrangement of one of his finest compositions, the "Love Theme for Nata" from Cinema Paradiso. After following this album on its wide-ranging journey, hearing this desperately romantic theme feels like coming home. I only wish there was more of it.

Two tracks from The Good, the Bad and the Ugly are outstanding, but not necessarily for the right reasons. Quincy Jones\' tacky and overblown take on the film\'s seminal theme drags on aimlessly for far too long, replete with keyboard and bass guitar riffs and strange tribal chanting,. Metallica has more success with "The Ecstasy of Gold", despite being the only hard rock performers on the album. Surprisingly enough, they produce one of the album\'s most affectionate tracks; they make it their own, rocking away on grinding guitars, whilst retaining the epic quality of Morricone\'s original. Similarly, Bruce Springsteen\'s electric version of the theme from Once Upon a Time in the West holds onto the spirit of the original but gives it a haunting, contemporary twist that at times evokes Terje Rypdal.

Vanessa and the O\'s offer a welcome interlude with one of Morricone\'s most enduring non-film score tracks, "Je Changerais d\'Avis", based on Francoise Hardy\'s interpretation of the Italian pop song, "Se Telefonando", originally performed by Mina. It\'s a wonderful song and, while it would be hard to top Mme Hardy, they give it a good shot. Daniela Mercury\'s performance of "Fica Conmigo (Hurry to Me)" from Metti una sera a cena is similarly spirited but the vocals are sometimes distorted to the point where it sounds like she\'s singing backwards. Still, it\'s better than Roger Waters\' somnolent, nasal performance of "Lost Boys Calling" from The Legend of 1900. It\'s frustrating to think that this was chosen over a multitude of other compositions for inclusion on the album.

All of the tracks are held together by bridge passages composed by Morricone especially for this release. This personal touch lets us know this is not just another utilitarian compilation of Morricone\'s work. Unfortunately, it\'s also not the wondrous, thrilling tribute it could have been. But if it does go some way to letting Mr. Morricone know just how much he\'s appreciated, as well as bringing his work to a new audience, it\'s been a worthwhile venture.