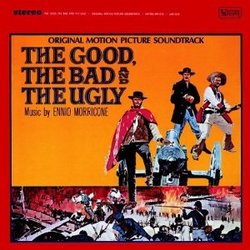 The Good, The Bad and The Ugly - Expanded Edition

Review: Good, The Bad and the Ugly (expanded), The

No one brought as many new ideas and revolutionary takes on the western genre as Sergio Leone did with his Spaghetti Westerns. His Man With No Name trilogy (A Fistful of Dollars, For a Few Dollars More, and The Good, The Bad and The Ugly) made Clint Eastwood a household name and connected with audiences around the world. While succeeding as popular entertainment, their artistic merits were debated at the time and quickly dismissed. Time has been on Leone's side and the longevity and impact of his films still reverberates through our culture and, more specifically, the Western genre itself. There is little argument that the best of the trilogy is the last one—a stunning accomplishment in style, character, visual storytelling, and, of course, it's incredible music score. The plot is relatively simple: three ruthless gunslingers are in search of $200,000 in stolen Yankee gold. What makes the film stand out, however, is how this story is told. While some will debate as to which movie in Leone's canon is the best; for me, The Good, The Bad and The Ugly is his masterpiece and my favorite Western of all time.

In breaking tradition with how they worked on the previous two movies, Ennio Morricone and Leone developed the major themes of the film before production started. They would later undertake this method for future projects like Once Upon a Time in The West. Leone would play the music on set while filming and even orchestrate camera moves to match the cues. The final result is a legendary film score that put Morricone's name on the map.

When the film was released in 1966, Parade and RCA put out an album of roughly 35 minutes of score. As fans of the movie were aware, there was a great deal of memorable music left out. The CD release in the late 80's was identical to the vinyl album. Now MGM Music and Capitol Records have released an expanded version of the score to coincide with the release of the Special Edition DVD. All the previously released tracks are here with the new tracks added to keep the chronological order of the film.

The theme song is a remarkably simple two-note melody that is instantly recognizable and is the heart of the score. Although this simple theme is used for all three of the main characters, what is different is the instrument being played: soprano flute for Blondie (Eastwood), arghilofono for Sentenza (Van Cleef), and human voices for Tuco (Wallach). As such, this theme is repeated throughout the film over and over, but never to the point where it's overdone. Timing is everything in Leone's films, and he knew how to manipulate the audience by playing this theme at only the appropriate moments. That is the principal reason why it's so memorable.

This, of course, is not to imply the rest of the score is filler. Hardly. Morricone applies his magic to give the epic Civil War battle scenes their poignancy, the cold-blooded murders their comic timing, and the thrill of one-up-man ships its vibrancy. While each of the main characters can be justly regarded as cold-blooded murderers, what sets them apart is the extent of their greed and to what means they'll resort to in finding the hidden loot. The title descriptions of each character are relative. And with Morricone's music, Leone allows us to peer into each man's heart.

One of the best new cues is "Padre Ramirez" for the scene where Tuco tries to reconcile his relationship with his brother whom he hasn't seen in years. While Blondie secretly watches, the brothers end up in a brief scuffle and depart on bitter terms. A solo classic guitar conveys the pain and regret between the brothers. As Tuco and Blondie leave the monastery, Tuco sings the praises of his brother and the love between the two. In that moment, Tuco is partially redeemed in Blondie's eyes. Yes, Tuco may be a thief, a rapist, a murderer, and a liar, but he's got heart. As the two men share a cigar, the solo guitar slows in tempo and the orchestra kicks in to give a rousing kick-off to their journey.

Another great cue is "Morte Di Un Soldato (Death of a Soldier)". It begins with a mourning male chorus accompanied by a harmonica as the Union Captain dies upon hearing the explosion that destroys the bridge for which many of his men have died needlessly. As Blondie and Tuco cross the river and near their destination, they come across a mortally wounded Confederate soldier. Ignoring Tuco, Blondie stops to ease the dying soldier's pain by giving him his cigar and long coat. The subdued music continues it's mourning with a solo horn section while the orchestra quietly accompanies his last breaths.

The last cue "Il Triello (The Trio)" is also unforgettable. As the gunfighters end up in a three way showdown in a graveyard, all sound effects and dialogue are gone with only Morricone's score helping to tell the story. Guitars and orchestra combine together with the editing to slowly ratchet up the tension over the next seven minutes as the three face off against one another and try to decide who to shoot first. It ends with lightening fast close-ups of eyes, hands, and pistols and with the every instrument creating a pounding heartbeat until finally a shot is fired and all the music stops.

While clocking in at 55:03 this CD release is still not complete. In 2001, a European company GDM Music released an expanded score that clocked in at 59:30. Both releases are essentially the same as far as the number of cues and titles. The disparity lies in sound quality and the use of different versions of the same cue. An A/B comparison between the domestic release and the European release revealed that while the source material is the same (scratches and noise in identical spots), the noise floor on the domestic release is quieter. Perhaps a level of noise reduction was applied. Most of the unreleased cues sound as good as the original cues. The main differences between the two releases lie in cues "La Storia Di Un Soldato" and "Il Triello". The domestic release lifts these cues from the previous release while both these cues are 2 minutes longer on the European release. For "Il Triello", the domestic release is abruptly cut short before the final 2 minutes and leaves off the full build up of the tempo leading up to the resolution. The differences in "La Storia Di Un Soldato" are more pronounced. Not only is the European cut two minutes longer, but it's a different arrangement. This piece is played while Tuco is beaten into submission at the Union camp. The Euro version features vocals which are mixed to bring them more to the forefront. Neither, however, is faithful to the movie version which features a violin solo, but the Euro version is closer in spirit.

Without question, Ennio Morricone's score to The Good, The Bad and The Uglyis a masterpiece of film music. He strikes the perfect notes to give heart and soul to the otherwise ruthless action on the screen. There's simplicity and coolness to the main theme making it instantly memorable. This score is a must have in any film score library. While both CDs feature an expanded score, they are by no means complete. Some cues (like the final one where Blondie shoots Tuco's noose and rides off) are still missing. Given a choice between the two releases, however, I would hunt down the European version and get the full version of the final shootout cue.