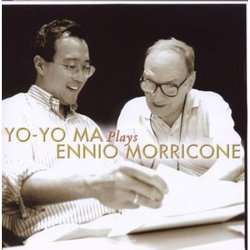 The work of renowned film composer Ennio Morricone is familiar to all film music aficionados and needs no introduction. Ever since he came to notoriety with his breakthrough work on Sergio Leone's Man With No Name trilogy, many producers and performers have re-interpreted his work through their own sensibilities with varying degrees of success. The latest artist to put his spin on the maestro's work is gifted cellist, Yo-Yo Ma. What separates this release from previous efforts is the fact that Ma worked together with Morricone. This coming together of two very gifted artists has resulted in a work that is both fresh and original.

Rather than simply going through the motions of re-recording some of Morricone's best pieces with another orchestra, a more novel approach was taken. Yo-Yo Ma uses his cello to supplant the featured instruments in the selected cues. The results are amazing. On "Gabriel's Oboe" from The Mission, the cello replaces the oboe. On "Cockeye's Song" from Once Upon a Time in America, Zamfir's pan flute is swapped out for the cello. The highlight of the album is "Ecstasy of Gold" from The Good, The Bad & The Ugly. On this famous cue, Ma's cello becomes the voice of the female soloist. It's played with such fervent passion, it's intoxicating.

Working together, Morricone and Ma have created several different suites of music bound together by films and the prominent directors Morricone has worked with. The three major director suites are for Giuseppe Tornatore, Brian DePalma, and, of course, Sergio Leone. The Mission and Lady Caliph both feature two cues tied together. There's also a suite combining the composer's work on Moses and Marco Polo. The suites are put together thoughtfully and seamlessly. For Morricone fans, listening to these suites breathes new life into music with which we're so familiar. With Yo-Yo Ma's grace and precision, even some of the lesser known cues demand multiple spins.

It's simply amazing to hear what Morricone and Ma have done. The collaboration between these two giants is a joy to behold even for the casual listener. For soundtracks fans, this is a no-brainer. Pick it up now. Highly recommended.