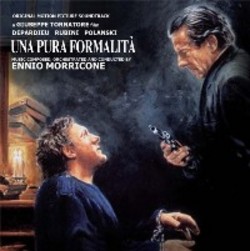 For this story at the borders of reality, Ennio Morricone has composed dramatic contemporary music, perfect to describe this kind of "other dimension" in which the protagonists are placed, alternated with calm instrumental versions of "Ricordare". The song, music by Ennio and Andrea Morricone with the lyrics by director Tornatore and performed in italian and french by Gerard Depardieu.

For the making of this CD a first-generation master of the original album was used properly remastered and restored in digital.