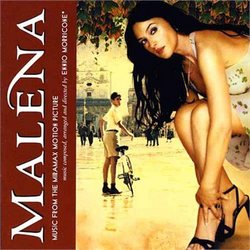 Malena is about a woman (Monica Bellucci) who is the subject matter for a group of young adolescent boys, and for one in particular, a dream come true. Directed by Guiseppe Tornatore, who delighted audiences with Cinema Paradiso and The Legend of 1900, Malena features a musical score by frequent collaborator Ennio Morricone, who also happened to get an Academy Award Nomination for his work on this film. Is it justified? Certainly!

"Inchini Ipocriti E Disperazione", the first track on the album, is a whimsical cue, filled with pizzicato, and a slightly off-tune piano (a nice effect that Morricone has used in the past). With sliding notes and a hint of mystery, this theme ends up becoming a delightful march the next time we hear it in "Passeggiata In Paese". Some of the cues are traditional dramatic Morricone, with the lush string section and emotional melodies. A bit of guitar work also graces the score, as would be expected for a Morricone work.

Tense orchestra and bombastic percussion abound in "Linciaggio", which is immediately followed with a more militaristic rendition of the main theme in "Orgia". Morricone uses what sounds like an Andean flute (as he did in The Mission) very subtly in "Visioni (Fantasie D'Amore)", and it adds to the slightly melancholy emotion on the cue. The album gets progressively more serious and dramatic, and ends with a rather downtrodden cue "Momenti Difficili", which I found to be a rather disappointing way to end the album. But that's the way the film ends, so who am I to complain about sad endings?

Considering what this film score is up against this year, I seriously believe that Morricone, who although he has been nominated now five times and has never won an Academy Award, might actually have a shot at winning. This score has plenty of depth, and while bits and pieces of it sounded slightly familiar, I realized that it was merely a stylistic issue, and can be attributed to Morricone writing like Morricone. Let's hope that the Academy finally sees fit to honor him the way that the rest of the world has done for almost 40 years.