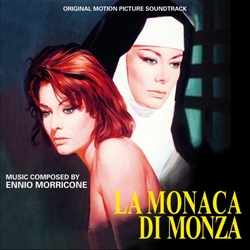 La monaca di Monza (1969) features a brief but passionate Morricone score, highlighted by a tragic romantic theme, a lovely pastoral theme for the couple's child and Baroque-flavored action cues for the Spanish pursuers.

Made a year later, La califfa's thematically rich score features Morricone's favorite musical collaborators (Edda dell'Orso, Alessandro Alessandroni and I Cantori Moderni) for an emotional rollercoaster that's much better-known than the film it's attached to.

The program for La monaca di Monza, probably one of the shortest scores composed by Morricone, expands by seven minutes (including a beautiful choral piece) the previous release by Point Records, issued in the early nineties and now hard-to-find. The program for La califfa is the same as the expensive and now out-of-print Japanese import CD by Verita Note, but with a new mastering by Claudio Fuiano and Dániel Winkler which eliminates some drop-outs and corrects the switched stereo channels from previous editions.

The 20-page full-color booklet features many illustrations and a detailed discussion of both scores by Gergely Hubai, who also provides track-by-track analyses for these masterful works.