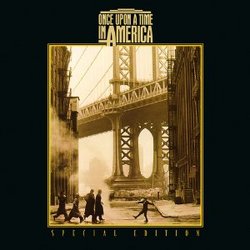 Once Upon a Time in America

Review: Once Upon A Time In America

Once Upon A Time In America is the final re-teaming of director Sergio Leone and composer Ennio Morricone, two titans of the film world whose previous collaborations were nothing short of brilliant. Together they forever changed the face of the cinematic Western landscape. Leone gave the world his completely different perspective on the Western while Morricone infused the films with operatic grandeur. The films (A Fistful of Dollars, For A Few Dollars More, The Good, The Bad & The Ugly, and Once Upon A Time In The West) became landmarks and ushered in a new genre of movies: the "Spaghetti Western".

While the two had not worked together since 1972’s A Fistful of Dynamite, nothing seemed to have changed between then and the 1983 release of Once Upon A Time In America. For Leone’s epic tale of Jewish gangsters spanning 60 years, Morricone created another one of his superb scores. Although there are perhaps only four themes played throughout the film, it’s how they’re used that makes them so effective. As with his past work, Morricone knows how to use one theme to evoke different emotions depending on which scene it’s used for. America is a four hour movie that’s told in a non-linear fashion. When the same themes are used over and over again as the story unfolds, there is an immense payoff by the end. Ennio’s themes are what keep the epic scope of the film from dwarfing the individual characters whose lives we follow. It’s a difficult task but Ennio makes it seem like a breeze.

While not operatic as his previous scores for Leone’s films, Morricone’s style in America is closer to his work in The Untouchables and the unused What Dreams May Come. While those films came much later, you can hear the basic motifs for the main themes springing out of his work for America. One of the unique aspects of this score is Ennio’s incorporation of Gheorghe Zamfir, who plays a pan flute. (Ed.: Yes, this is the same Zamfir who had those mail-order ads in the 1980s!) At times this music is used to convey remembrance, at other times terror. Zamfir’s flute playing was also used to haunting effect in Peter Weir’s Picnic at Hanging Rock.

This Special Edition release contains the 15 tracks that were previously available on the Mercury German Import CD plus some 27 minutes worth of unreleased material. One of these bonus tracks is a 13-minute medley of the themes along with some atonal suspense music used in the movie but missing from the previous release. Another cue is a temp version of the "Poverty" theme. The last two tracks are unused early versions of the main theme, and it is interesting to see how the theme evolved to what it is in the final version. All this extra material makes this CD a "must have" even if you own the previous release. In fact this release is a "must have" for any Morricone fan, any soundtrack collector, or simply anyone who loves beautifully composed music.