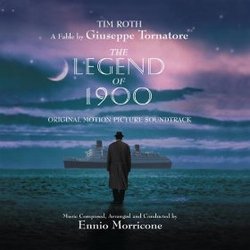 Performed by
The Accademia Musicale Italiana

One of the most prolific composers of the later half of the 20th century, Ennio Morricone, has released a gem of score on Sony Classical, from the film The Legend of 1900.

It’s been several years since Mr. Morricone has produced something that has caught my attention that I would put in regular rotation on my CD player. Most of this album is a sum of its parts from Morricone’s past film score work, with orchestrations and thematic passages harking back to The Untouchables and Once Upon A Time In America.

The movie, as listed, is a fable about a man called 1900 born, you guessed it, in 1900, who spent his entire life on a ship, never setting foot on land. As you can also tell by the arrangements in the score, that 1900, played by Tim Roth, is a pianist, a contemporary of famed jazz pianist, Jelly Roll Morton. In fact the original Italian translation of the title is "The Legend of the Pianist on the Ocean." The musical arrangement are very period oriented, but not so much so to be annoying and stereotypical, somewhere along the lines of Scott Joplin’s music adapted by Marvin Hamlisch for The Sting.

Gershwin heavily influences most of the main theme, probably too much so for some listeners, but a nice variation on an idea. But overall it’s a pleasure to listen to, my favorite track being the behemoth eight-minute piece, "The Legend of the Pianist." Most of the other cues on the album are also standout pieces, making this one of the best scores of the year, or at least on of the more appropriate ones given the film’s thematic material.

Even Roger Waters’ (formerly of Pink Floyd) song "Lost Boys Calling" is a great vocal work, and if I had to choose between this pop-esque tune and the one sung by Ms. Dion for that "other" boat movie, I’d choose this one. Sony has, since their coup with the "other" boat movie, consistently put out nice CDs, starting with Oscar and Lucinda, which arrived shortly after the first Titanic CD, and has continued to this day. I’m glad to see that when a record company receives a windfall in a certain market, they pay back that market segment with releases of good scores, no matter how small the viewing audience may be for the film.

If you’re an Ennio Morricone fan, this is definitely one for your collection, if you’re just starting out, grab this one along with the scores to The Mission, The Untouchables, Once Upon A Time in America, and A Fistful of Dollars to get started. It will be well worth your time.