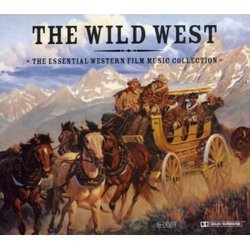 by David A. Koran June 23, 2001
4 / 5 Stars
It’s been a pretty full year for movie theme compilations, and just about every record company has had their fingers in the pie. Silva has been leading the pack by putting out variously themed compilations during the 90s like The Crimson Pirate, Cinema Choral Classics, and The Mark Of Zorro. Out of all of those previous releases, someone at Silva has finally put all that experience to good use with their release of The Wild West: The Essential Western Film Music Collection. I have to admit I’m kind of a western buff, both in movies but also the lore and pure ruggedness of the western United States. The selections presented here are some of the best samplings of music written for film and television dealing with that subject, a true cross section of what makes the west so appealing for filmmakers and the audience. It’s true that some more enduring themes in music, and film music more specifically, are from westerns like The Magnificent Seven, A Fistfull of Dollars, The Professionals, and The Big Country, and rightly so, since never has a musical genre encompassed describing so perfectly the character of the people and landscape and environments they inhabit like the western.

Just about any film composer worth their weight in the last 75 years has written music for a western. From the golden age like Dimitri Tionmkin, Max Steiner,and Alfred Newman to some of the more current composers of James Newton Howard, Randy Newman, and Basil Poledouris, each has made their mark and each are represented by some of their best and most memorable work on this two CD set. It’s truly hard to cover all the music represented here on the set, since each piece has its own strengths and power. Some of the music, such as Gettysburg Glory, and The Last Of The Mohicans have now direct classification as westerns, but their music was written in the spirit of the west. Some of my favorites on the album are from true westerns, however, like The Big Country, Dances With Wolves, and the great How The West Was Won, presented here with relative closeness to the original recordings, this time as with most Silva compilations played by The City of Prague Philharmonic. It seems that this orchestra, under the tutelage of Nic Raine, Paul Bateman and Derek Wadsworth, has increased their overall skill with reproducing the original sound of the scores, a rare feat nowadays for special product compilations.

Overall, I’d rate this as one of Silva’s best releases, and definitely their best compilation. For those who need to get a sampling of this branch of film music, or this type of music in general, it’s the best starting point. I’ve even been inspired by some of these recordings to search out the full scores to several of the movies and television shows heard here. Some have never seen full score recording before, and hopefully Silva or some other company will be inspired to possibly do so, it really can’t hurt, it’s a neglected film genre nowadays (The Wild Wild West from Barry Sonnenfeld did not count this year... and may have actually hurt those prospects.) Run, do not walk, do not pass go, to your local record store and pick up this release, you won’t be disappointed!

click here to see the contents of the second disc