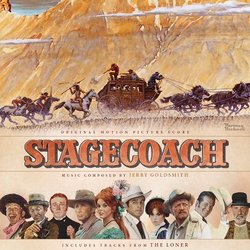 The first hombre coming down the trail is the score to the 20th Century Fox 1966 remake of Stagecoach. This rousing adventurous romp was originally released by Film Score Monthly back in 1998, but is now out of print. For this newly remastered and expanded release, Producers Nick Redman and Mike Matessino located the original score elements, including the missing banjo overlay and 8 extra minutes of never-before-released music, and have given new life to one of Jerry Goldsmith's finest western scores.

Detailed liner notes by Julie Kirgo and fantastic art direction by Jim Titus round out this incredible looking package. As an added bonus, two scores from the short lived tv series The Loner are included in this 54 minute presentation.