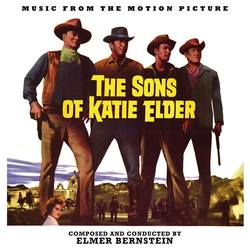 The Sons of Katie Elder

La-La Land Records and Paramount Pictures present the world premiere release of legendary composer Elmer Bernstein's original motion picture score from the classic 1965 western The Sons of Katie Elder, starring John Wayne and Dean Martin, and directed by Henry Hathaway. Considered one of Bernstein's finest western scores, The Sons of Katie Elder finally arrives for the first time on any format as it was originally heard in the film. Previous soundtrack releases, including our own – paired with The Shootist, featured the original LP recording and presentation, which is markedly different from the original cues in the actual film. This release finally includes the film version cues, featuring much of the dramatic underscore not heard in the previous assembly. Produced by Dan Goldwasser, restored by Chris Malone, and mastered by Doug Schwartz from mono music stems and mono Ľ'' tapes, this special release features bonus tracks, including source music and alternate cues. Exclusive liner notes from writer Jeff Bond and bulls-eye art design by Dan Goldwasser round out this must-have release, limited to 1500 units.