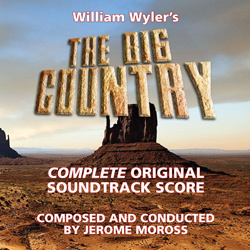 The Western was of particular personal interest to Moross and here we have, for the first time on CD in this country the ENTIRE SCORE that was composed for this seminal 1958 movie that starred Charlton Heston and Gregory Peck. Feudin' and fightin' aside, the music's the thing here and the breathtaking score fairly rattles along with inventive and carefully arranged scoring.

At a CD-busting 74 minutes, it's time to re-examine the music which, for this deluxe edition has been meticulously remastered and sensitively re-processed to bring out every nuance of the studio orchestra. New notes are provided together with many extras such as full personnel details and a bio on the composer.

If you only ever bought the 30 minute LP in 1958, it's time to listen to this long-neglected complete gem which has influenced so many composers of the genre after him such as Elmer Bernstein some years later for The Magnificent Seven.

So significant has this music been, that it was used in a British advertising campaign for McDonalds!