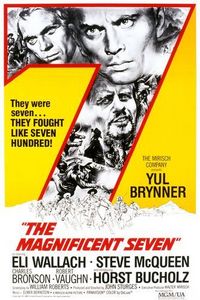 Based on the 1954 Akira Kurosawa classic film Seven Samurai, 1960's The Magnificent Seven tells the rousing story about a village in need, and the gunfighters hired to protect them.  The dastardly bandit Calvera (Eli Wallach) and his gang keeps raiding a small Mexican village, and the townsfolk are finally fed up with it.  They go to buy weapons in an American border town, where gunslinger Chris (Yul Brynner) tells them that it would be cheaper to hire more gunslingers.  Chris ends up gathering six other gunmen (including Steve McQueen, Charles Bronson, James Coburn and Robert Vaughn), who set out to protect the village from Calvera and his gang. Soon the 'seven' realize that they might have taken on more than they bargained for, causing tensions that threaten their goal of ridding the village of Calvera.

The film might not be the deepest, nor the most original (gunmen protect a village under siege), but where The Magnificent Seven succeeds is in the dynamic within the all-star cast.  Brynner is clearly the leader (at one point he thought he might direct the film himself), but everyone gets more-or-less equal screen time.  Directed by veteran Western filmmaker John Sturges, the movie runs at a fun pace, before getting a little bogged down at last act. The film only got one Oscar nomination, for Elmer Bernstein's original score, which is now considered a classic.

Released as a single-disc Blu-ray, this is basically a way to get the original Magnificent Seven without buying the box set containing the four films.  This is the same transfer done for the 50th Anniversary in 2010, and while it might not be as impressive as it would be if they had done a true film restoration, it's still a very solid transfer for the film. It suffers from a few minor blemishes and specs on the film print, and the opening titles indicate a bit of wobble on the transfer, but overall the film grain is nicely retained, with no evident DNR or edge enhancement.  Colors are not deeply saturated, but they never were meant to be bold and popping. Black levels are deep but don't crush, and fine detail seems to be accurately reproduced.  All in all, it's a very good transfer.

Audio for the film is presented primarily in an English DTS-HD Master Audio 5.1 mix, but it's primarily a front-heavy track, save for the occasional bullet ricochet, and Elmer Bernstein's score probably benefits the most from the spatial re-mix. Purists need not fret, as a Dolby Digital English mono is also included, and a Dolby Digital 5.1 Spanish track rounds out the audio options.

Billed as a "50th Anniversary Edition", this Blu-ray contains most of the extras from previous DVD releases, but is still missing a few things.  First up is the rather informative, albeit sparse at times, commentary track featuring actors James Coburn and Eli Wallach, as well as producer Walter Mirisch and assistant director Robert Relyea.

Carried over from the original 2001 Special Edition DVD release is the documentary on the making of the film, "Guns for Hire: The Making of The Magnificent Seven" (SD 16x9, 47-minutes).  This is a very solid and candid making-of piece, with interviews and behind-the-scenes photos helping flesh out the story of how the film got made. From the 2006 Collector's Edition DVD, we get "Elmer Bernstein and The Magnificent Seven" (SD 16x9, 15-minutes) is a very nice piece hosted by film music historian Jon Burlingame about the importance of Bernstein's score, and its place within the western genre. "The Linen Book: Lost Images from The Magnificent Seven" (SD 16x9, 15-minutes) looks at the rare linen book for the film that was found in the salt mine vault in Kansas, which has a lot of great behind-the-scenes photos, but because some of the same stories heard in the making-of documentary and the commentary are told again, it feels a tad repetitive.

A "Still Gallery" (HD) is included, as well as two "Theatrical Trailers" (HD), but we're missing the commentary track by film historian Sir Christopher Frayling, and his accompanying featurette which was on the Collector's Edition.  No idea what happened there, but they surely could have found the room on the disc for them, so I surmise that it might have been a rights issue.  So, don't get rid of your DVD just yet!

It might not be considered a true cinema classic, but you can't go wrong with The Magnificent Seven.  A solid remake with a star-studded cast, great musical score, soaring vistas and solid direction by John Sturges, the film is worth the upgrade on Blu-ray, but won't give you any new extras beyond what you probably already had.