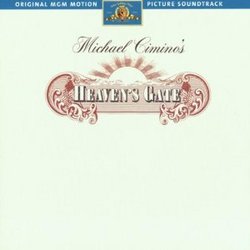 by David A. Koran January 27, 2000
4.5 / 5 Stars
This much-maligned film of 1980, directed by Michael Cimino (Deer Hunter) finally sees the light of day on CD courtesy of Ryko. The score, at the time, was composed AND performed by a young folk newcomer, David Mansfield. Since then David has gone on to score The Sicilian, Year of the Dragon, and The Ballad of Little Jo and cut himself quite a niche as a composer for film. This score was originally released on a rather hard to find LP shortly after it’s theatrical release, and now with an additional 17 tracks, totaling over an extra 20 minutes of score.

Many reasons for the critical backlash against Cimino was for his massive budget overruns and the amount of time and fuss spent tuning the film to his vision. The film’s length was also an issue, running a bit over three hours, a stretch for many audiences in the early 1980s. The film had an amazing cast that contained the likes of Kris Kristofferson, Christopher Walken, John Hurt, Sam Waterston, Brad Dourif, and Jeff Bridges in one of his first film roles. I tried watching it twice but I’d have to say that the length and pace of the film was a bit to slow for my taste. It was beautifully shot, one of the few truly cinematic gems in America’s library of film. This film did pave the way for historically based movies such as Wyatt Earp, Gettysburg and Braveheart, each of which have their uncut running time nearing or over three hours. Granted the somewhat unwarranted backlash only allowed these films to be made after about a decade and a half, quite a long time in Hollywood.

The score is great. One of the few films of the past twenty years where the music written fits so well into the film that it ads true credibility and a sense realism to the story. The band, used for music not played by Mansfield himself, was comprised of a rather esteemed group of musicians. These folks included famed record producer/musician T-Bone Burnett and some members of actor Kris Kristofferson’s own band. To add a further level of realism, they also portrayed the band seen in the film’s dance hall and other sequences.

As mentioned in the liner notes, and which can be detected through just casual listening, the music’s source themes were derived from eastern-European folk music and work songs. Some of those songs can be heard in the film sung by various characters, but unfortunately they do not appear on this album as source cues. Some of the themes are also derived from traditional American music as well as, for the dance hall sequence, Strauss’ "The Blue Danube."

The theme that David Mansfield composed fits well as a ballad or when played as a waltz, a kind of multipurpose piece of music. It makes casual appearances throughout the 25 tracks on this release, less obnoxious that themes developed for similar films and more integrated into the entire feel of the film, texturing the time and setting of the film. I would highly recommend this score to just about anyone who likes film scores due to its difference to the average music written for films today, a true departure from the norm. It’s also great to note that Ryko continues their excellent issues of MGM film scores, and on this release marks one of their non-fold out inserts. This is a pleasure considering the map folding skills required to negotiate some of their earlier releases.