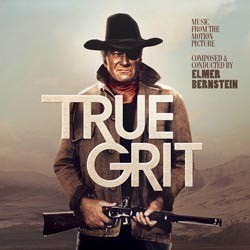 La-La Land Records, Paramount Pictures and Capitol Records/UME are proud to present Elmer Bernstein's rousing score to the classic Academy Award winning John Wayne Western True Grit. After waiting decades for a proper release fans can finally rejoice in this definitive presentation of one of the genre's greatest films!

The previous LP/CD, while an interesting experiment, never quite delivered the "goods" for any film score enthusiast. For many, it left them wanting more. Well, now you have it! Mastered from the original 1/4" mono masters, Producers Lukas Kendall and Neil S. Bulk have put together what Western fans and film score fans alike have been clamoring for over the years! With help by audio wizard Chris Malone and mastering engineer Doug Schwartz fans can finally hear Mr. Bernstein's score in all its brilliance on cd!

In addition to the film score, we have included several songs licensed and recorded for the film including various versions of the Main Title song performed by Glen Campbell, as well as a demo of the song "The Eyes of the Young" performed by Elmer Bernstein himself (co-written by Don Black)!

Also included on this set are 3 versions of "Go Home Girl" one version performed by John Hartford and two other versions performed by Glen Campbell. Antique looking booklet design by Jim Titus adds to the authenticity of Jeff Bond's rustic, informative notes.