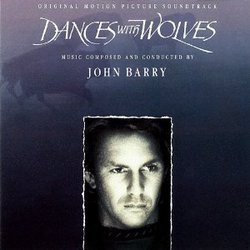 You know the name, you know the score, but now we know both to a fuller extent with this expanded album edition of Dances With Wolves. It was arguably the most critically lauded film released in 1990, eventually winning seven Oscars, one of which was reserved for composer John Barry. The film could be considered the last significant milestone in the genre of Westerns, with a story involving the white frontiersman submitting himself to the ancient, mysterious ways of the Native Americans and finding them preferable to the life he had known beforehand. It strove to make amends for years of amoral "cowboys versus Indians" plots in the movies, where the white man often ruled, instead presenting the Indian culture as far richer, far more insightful and amenable to a fulfilling life. John Barry's music could also be considered the last significant milestone of his already exceptional and trend-setting career. It was composed after his forced two-year absence from film and is filled to the brim with stirring thematic material and a real depth, which has somewhat eluded Barry in more recent years.

This release has been rumored and promised for years and finally Sony delivers a welcome, well-rounded package for the serious Barry fan and fans of the score. All of the familiar highlights from the original album are included; some of these tracks bolstered by additional material, while overall the album is augmented by nearly 15 minutes of previously unreleased cues. There are those of the opinion that lengthy John Barry albums are tedious and repetitive, usually complaining that Barry relies too heavily on variations of only two or three themes. To counter, there are some films which simply do not require a heaping amount of leitmotifs and Barry is master of grounding his scenes in unique moods and textures, often accomplishing this with a minimum of thematic material. He has rarely over-exerted himself to provide every scene in a film with new melodies and ideas, but this should never be thought of as a failing of him as a composer. He has always been a wellspring of stupendous melodies, impressive harmonic inventions and a style solely his own, unduplicated by any others in film. Dances With Wolves provided him one of his largest canvases on which to color with his musical magic.

"The Buffalo Hunt" is one of the most deserving cues in the score to receive expansion. It now includes bristling, active horn accents in a new melodic guise, plus a spine-tingling, arching section highlighted by choir. The "Main Title" is now fleshed out with the desperate, sullen version of the John Dunbar theme, plus a surprisingly buoyant version of the theme heard in "Ride To Fort Hayes". "Falling In Love" has a subdued, flute-led interpretation of the string-led melody heard in "The Buffalo Robe" before moving the sentimental love theme Barry composed. As with The Last Valley, The Black Hole and The Living Daylights, Barry's thematic inventions seem boundless as there is a myriad of ideas spread across the score's landscape, making lengthy albums of these that much more rewarding. The John Dunbar theme itself may have helped Barry capture that Oscar, but it is no more significant in the score's grand scheme than the achingly innocent Wolf theme, the thunderous Pawnee attack material, the soaring theme for Fort Sedgewick or the defiantly proud music carrying us with the Sioux to their Winter camp, far from the encroaching danger of the white man.

With this great amount of variety, the album can't help but be a marvelous listen end to end. It allows more insight into how Barry introduced and then reinterpreted the different themes during the course of the film, shifting tone, color and tempo to paint the inner portrait of the broken John Dunbar and the external conflict raging across the early America frontier. The score breathes more deeply now, allowing more space for smaller motivic gems to shine amidst its more expansive brethren and enveloping the listener in Dunbar's soul-searching journey to a fuller extent. This was an important score in 1990 for John Barry, for the genre of Westerns and for film in general and it is no less significant 14 years later, maybe made even more revelatory in hindsight when one senses the amount of John Barry's spirit it displays.