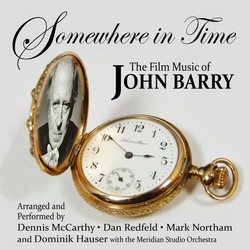 Somewhere In Time: The Film Music of John Barry

BuySoundtrax Records is pleased to announce this release; a compilation of newly produced recordings celebrating the work of one of the modern giants of film music from a composer of diversity and distinction whose elegant melodies were able to capture the heart of an audience as profoundly as his electrifying action music captured their attention throughout a career that spanned almost half a century.

This release takes some of Barry's most stimulating melodies, a couple of his earlier tracks, and a few lesser known pieces, arranged and interpreted for solo piano, live orchestra, and high-quality digital orchestra mixed with live strings, winds, and brass, in each case exploring the gentler touch of John Barry's magnificent film music.