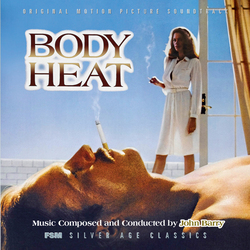 Taking his inspiration from such '40s noir classics as The Postman Always Rings Twice and Double Indemnity, Lawrence Kasdan struck gold with his first outing as both screenwriter and director in 1981's Body Heat. The torrid chemistry between lead actors William Hurt and Kathleen Turner helped the film launch a neo-noir trend. Kasdan was equally fortunate in his choice of composer: John Barry.

Barry wrote a sultry, smoky score that emerged from a tradition of small jazz combos in late-night, big-city bars—but while the key musical elements of Body Heat derive from jazz ideas and jazz instrumentation (there is a certain amount of jazz-style improvisation around the melody in some cues), a good deal of the score is traditionally orchestral and the strings play an important role throughout.

The first well-filled disc in FSM's 2CD presentation of Body Heat features the full score, plus alternates and a generous program of source music. Disc 2 opens with Barry's never-released soundtrack LP, mixed by Dan Wallin and (unlike subsequent issues which featured new mixes) approved by the composer. Rounding out disc 2 are 10 early demos of Barry's main theme, recorded with a small combo to demonstrate how it might sound with various instruments playing the melody.

The 16-page booklet, seductively illustrated with film stills by FSM art director Joe Sikoryak, features a perceptive essay on film and music (including a track-by-track analysis of the score) by authoritative film music writer Jon Burlingame.

John Barry's score to Body Heat ranks among his very finest—it elevates the film, heightens the emotional stakes, and remains a memorable listening experience on its own.