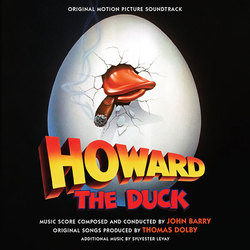 Intrada announces one its most ambitious releases of 2019 - the soundtrack to the 1986 film Howard the Duck, perhaps the first big-screen adaption of a Marvel comic. With songs by Thomas Dolby and performed by Cherry Bomb (featuring Back to the Future's Lea Thompson), writer-director Willard Huyck had Dolby top of mind when first considering music. Dolby was originally slated to score the film, but ultimately producer George Lucas and Dolby decided a more traditional approach was warranted. Enter composer John Barry, who was familiar with sci-fi extravaganzas, including The Black Hole, Moonraker, and Starcrash. Barry composed over 102 minutes of score for the film, with a large (for its time) orchestra of 93 players. While the filmmakers embraced most of the score, the ultralight sequence didn't quite click with them, so they brought in Sylvester Levay to compose for that sequence. Levay is a composer known for a more contemporary sound and he was getting a lot of attention for his current scoring of the Universal TV series Airwolf. Levay's 72-piece orchestra featuring synths and a heavy backbeat brought the momentum for which the filmmakers were looking.

Released with the cooperation of Universal Music Group and Universal Pictures, this expanded edition features three CDs. CD 1 presents the John Barry score as Barry envisioned it. CD 2 contains more than 22 minutes of alternate or rewritten Barry score, followed by Levay's contribution to the score. CD 3 contains the original Thomas Dolby songs and then the original 1986 MCA album program, that featured the Dolby songs and a suite from the Barry score. Intrada tops off the release with notes by John Barry expert Jon Burlingame.

In the film, Howard the Duck is accidentally beamed from Duckland, a planet of sentient ducks, to earth - Cleveland specifically. He saves Cherry Bomber Beverly (Lea Thompson) from thugs and they form an endearing friendship. Dr. Jenning (Jeffrey Jones) attempts to return Howard to his world, but instead transfers an evil spirit, the Dark Overlord, into his own body – and the fate of the world rests in Howard The Duck's hands.